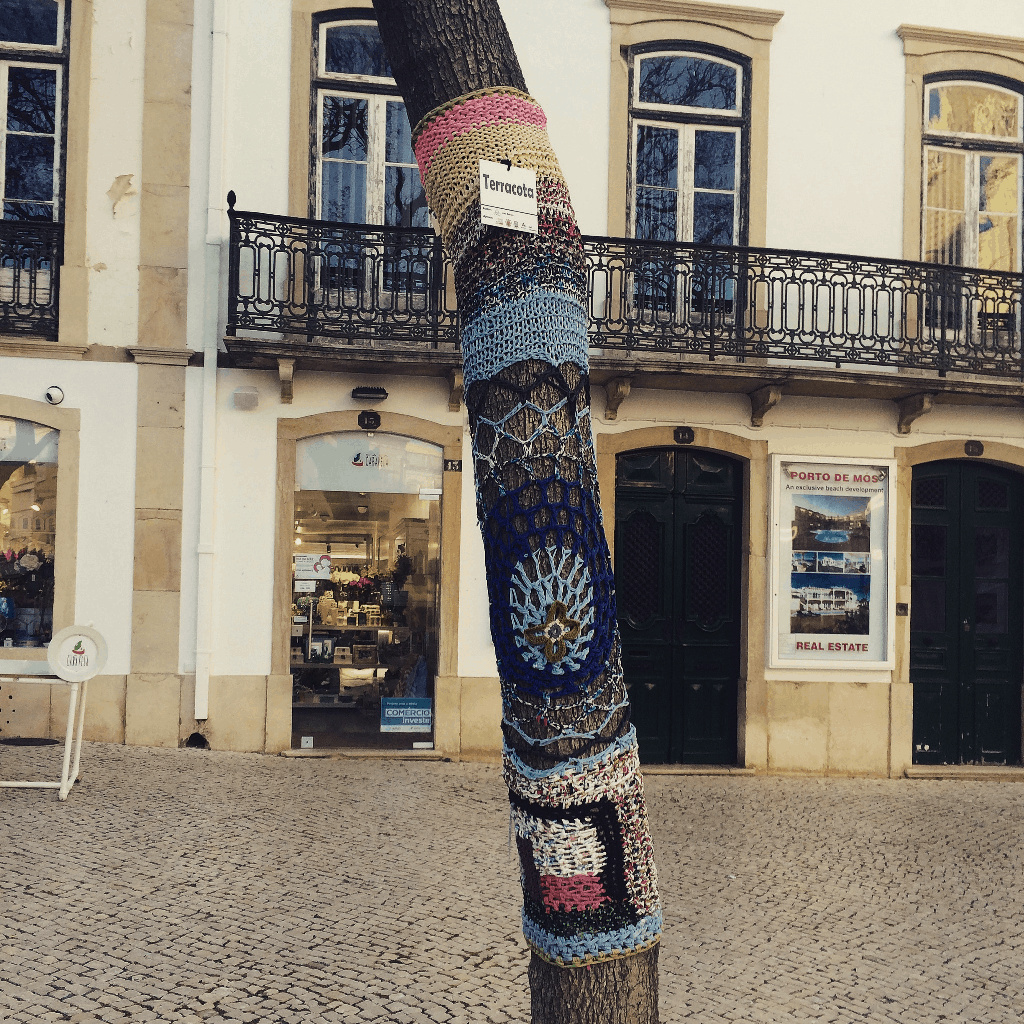 Having made my first ever trip to Portugal, to Lisbon, in 2014, I had been rather taken with it, so vowed to go again.  I was also interested in future travel/living ideas as Portugal is deemed to be the cheapest country in Western Europe.

This trip was a 5 day holiday, in late spring, to the Western Algarve.  We were staying in the town of Lagos (my mother was slightly alarmed, thinking we were off to Nigeria). Lagos is about an hours drive from Faro airport and the Western Algarve is known to be slightly less touristy than the Eastern Algarve resorts.

Lagos town itself is a quaint, very walkable, easy town to stay in. I’m glad we decided to stay in town rather than out at a resort type place. Being an older town, there are some lovely buildings and of course being Portuguese, lots of tiles, which I love! 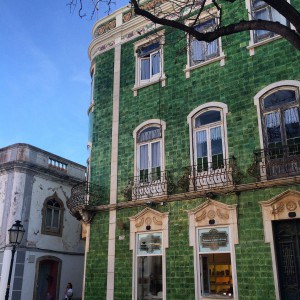 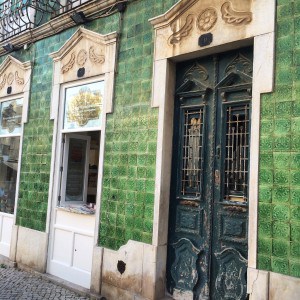 Outside of the town, at the various beaches and cliffs, it is simply gorgeous. I was actually shocked by how ridiculously pretty it was. The cliffs and rocks are incredible and reminded me of the Jurassic coast of Dorset in the UK, but of course sunnier. 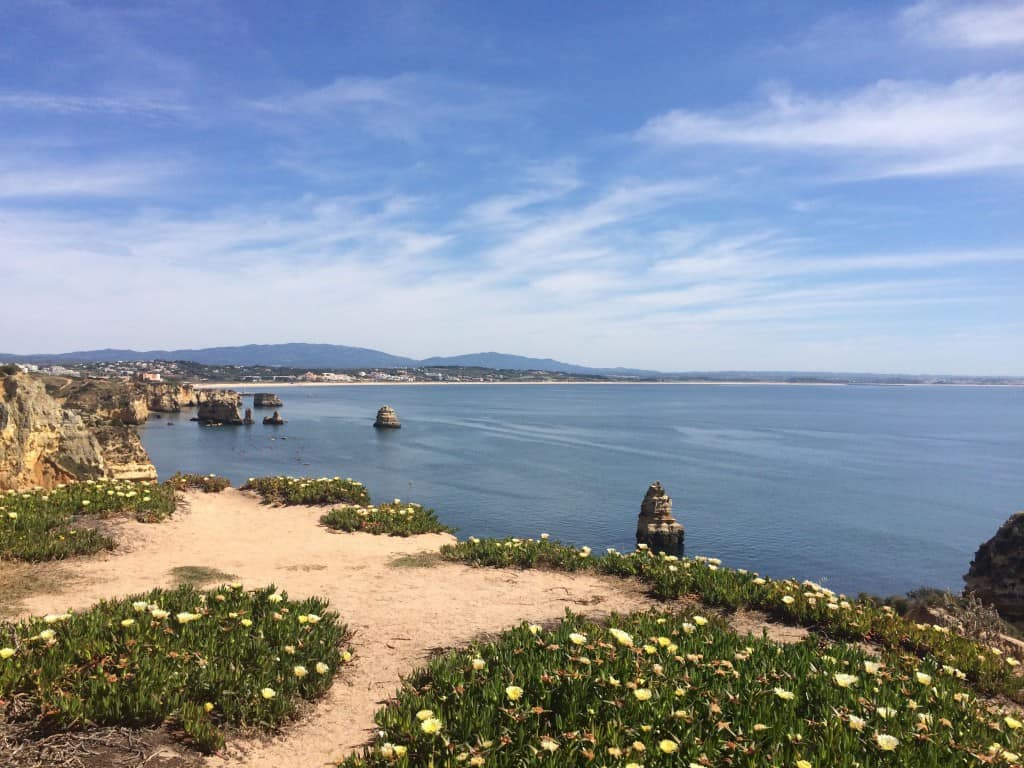 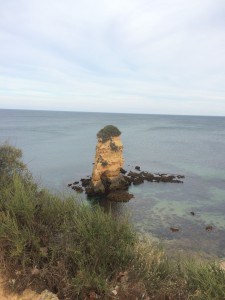 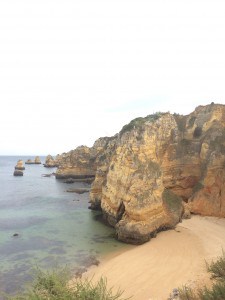 The place we were staying, in the words of Anna, the lady who checked us in, is ‘the countryside in the middle of town’. It really was. A family run business. They have the hotel next door  (with a pool we could use) and a bunch of holiday homes next door. We had a little house with 2 bedrooms, kitchen, living room with stones stairs up to a reading mezzanine and table and chairs and loungers outside to sit in the sun and enjoy the setting. It really was gorgeous.  They have a great taste and created a special kind of homeliness you don’t often see in holiday places in sunny locations. 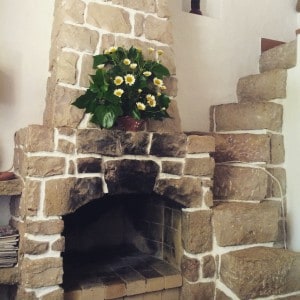 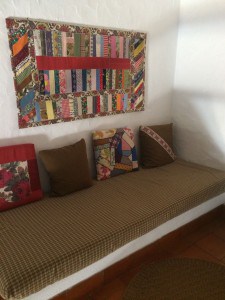 Great price too. And of course, I found through Airbnb, here. Because of having the hotel the next day, they were on hand 24 hours, not that we needed for anything. 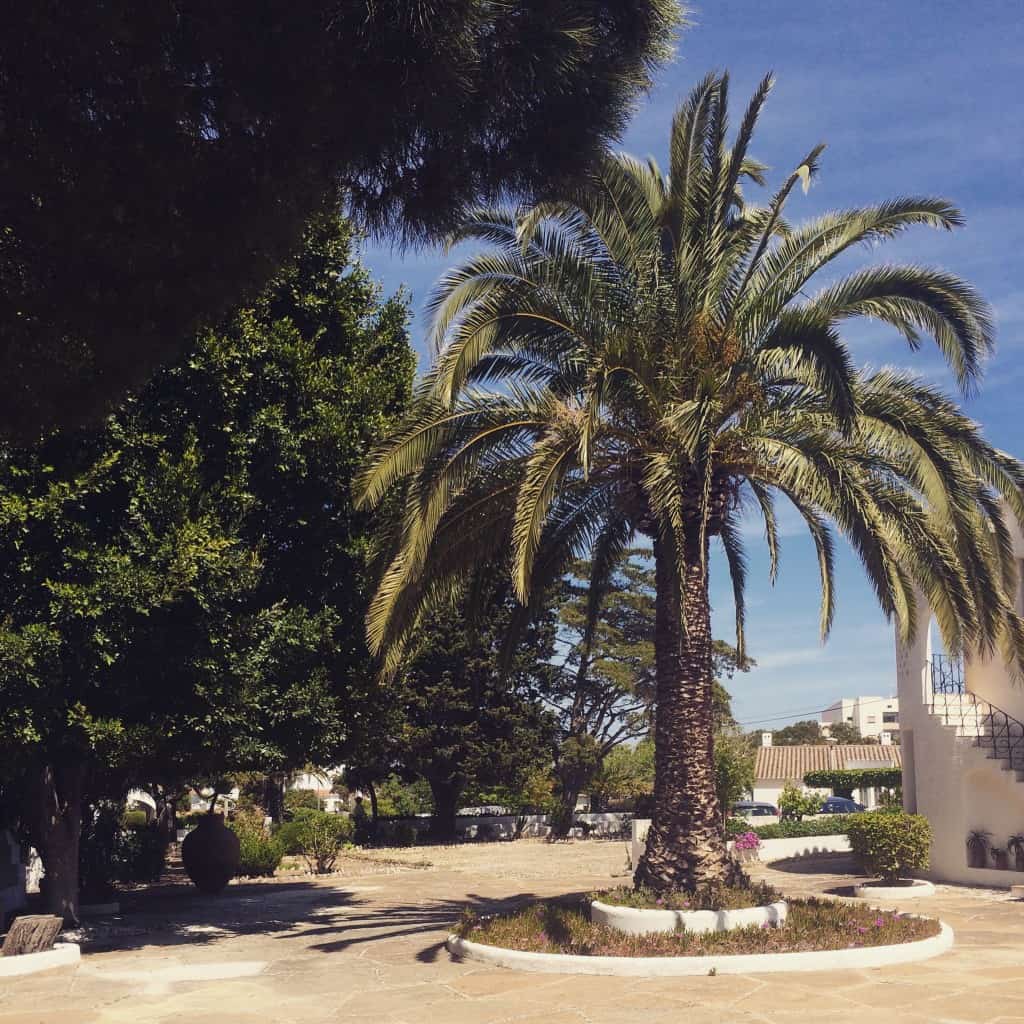 Always a priority for me. We started by stocking up on some stuff at the local supermarket. I simply love going to supermarkets abroad. They tell you so much about a place and you’re always likely to find things you’ve never seen or heard of before. Great value for money as usual and here we were interested to see the big stocks of salt cod. 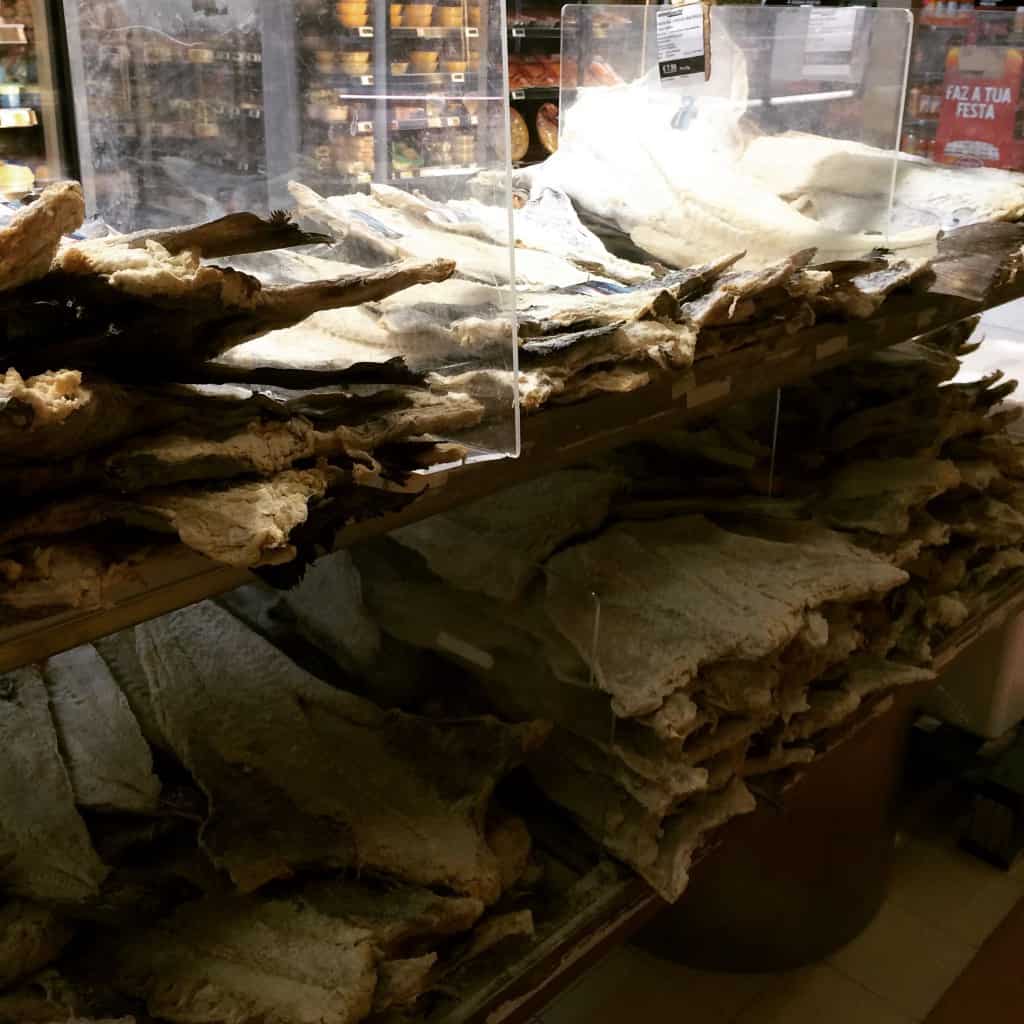 And not visit Portugal is complete without those amazing Pastel De Nata. 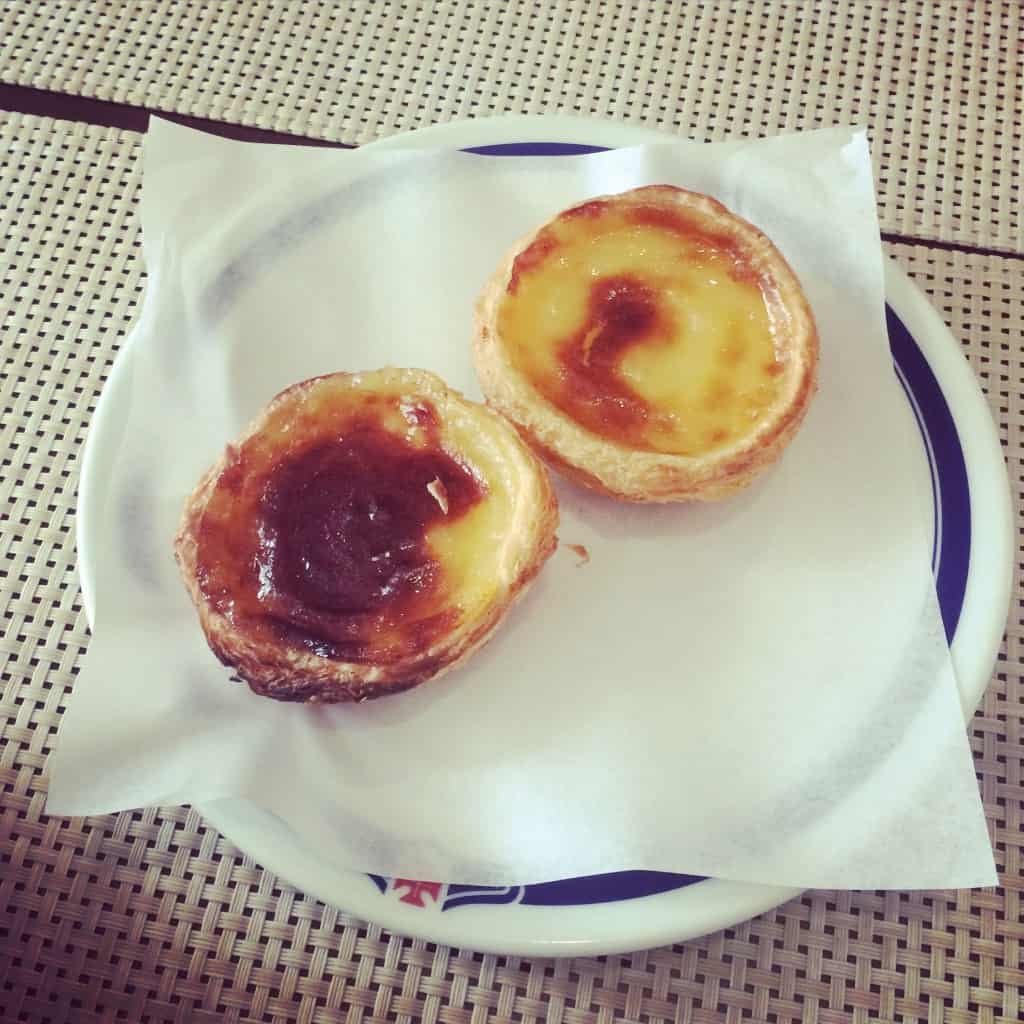 There are some lovely places in town. The menus can be quite samey but we did mainly hang out in the major touristy bit. Makes life easier on short trips.

We started with evening drinks most nights in the Taberna de Lagos. Strangely we were first attracted (or Mark was ) because, not matching with the style of the bar, the snooker was on. I hate sports in bars, but it was up on the big screen, with no sound and didn’t detract from the lovely vibe the place had. They were super friendly and they played the best music ever. Some really unusual but cool stuff. We ate there one night as well and the food was really good. 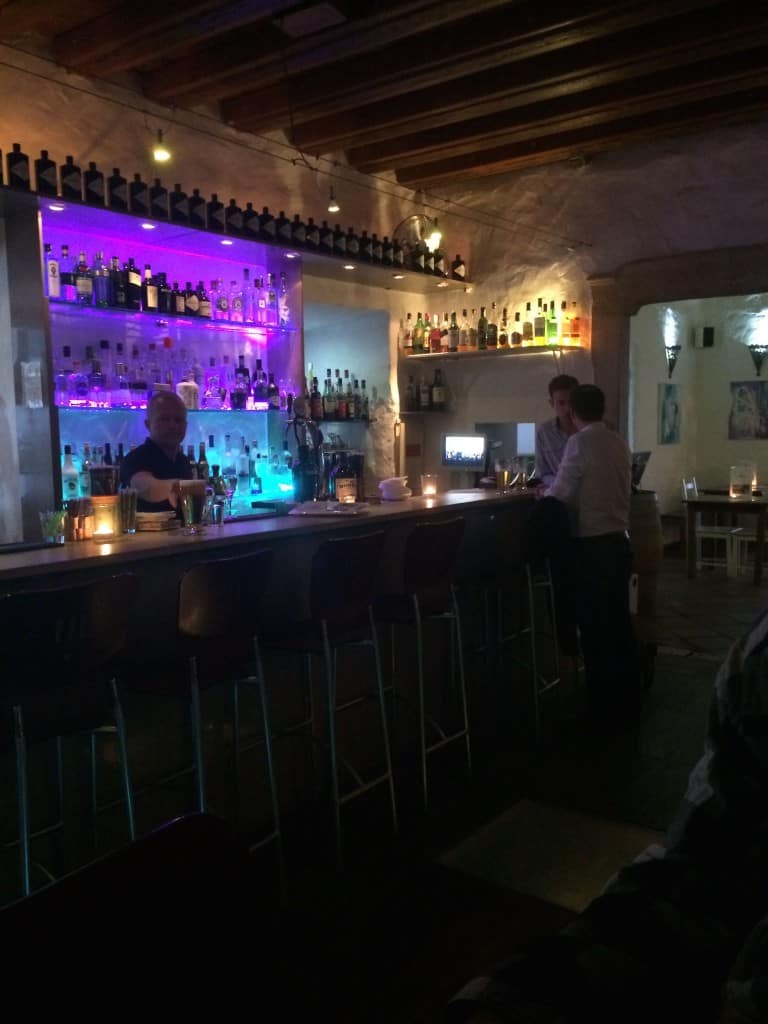 Another great place we ate at was Dom Vinho. Old skool,  great food and super friendly, with us having descended on them quite late. Another worthy mention goes to Mulligans. Sounds like a cheesy Irish bar but it’s a nice restaurant in a gorgeous, rustic old building. 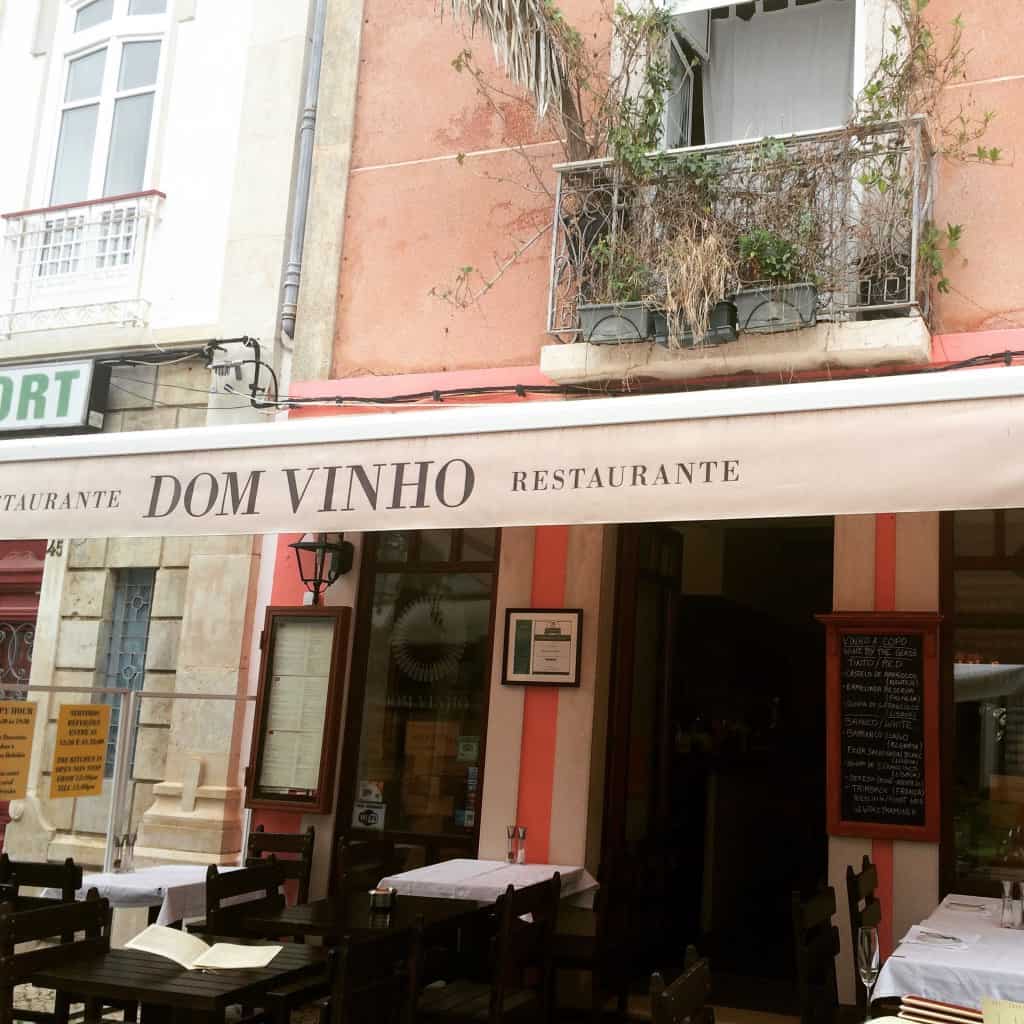 Locally, the most famous beach was closed due to them doing work to secure the crumbling cliff. It was a bit of an odd area. There was a hotel on the edge and surrounded by lots of holiday apartments. A bit of a sterile place. It did show signs of the area not being as well off as before the financial crisis. There was some graffiti down on the beach itself, which I found curiously beautiful but am sure is not appreciated by the tourists. 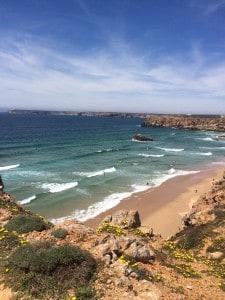 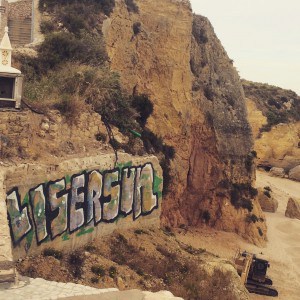 We visited Praia de Luz which, although very touristy, is incredibly pretty and the rock formations on the beach are lovely. As a Brit, it’s hard to go here without thinking of its history and I’m sure it’s been affected tourism-wise, but it is very lovely and is very family friendly. 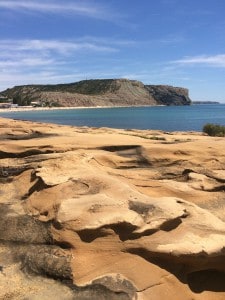 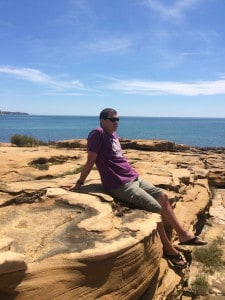 We made a trip out to Sapres which because of being out on a point in the ocean, is popular with surfers. 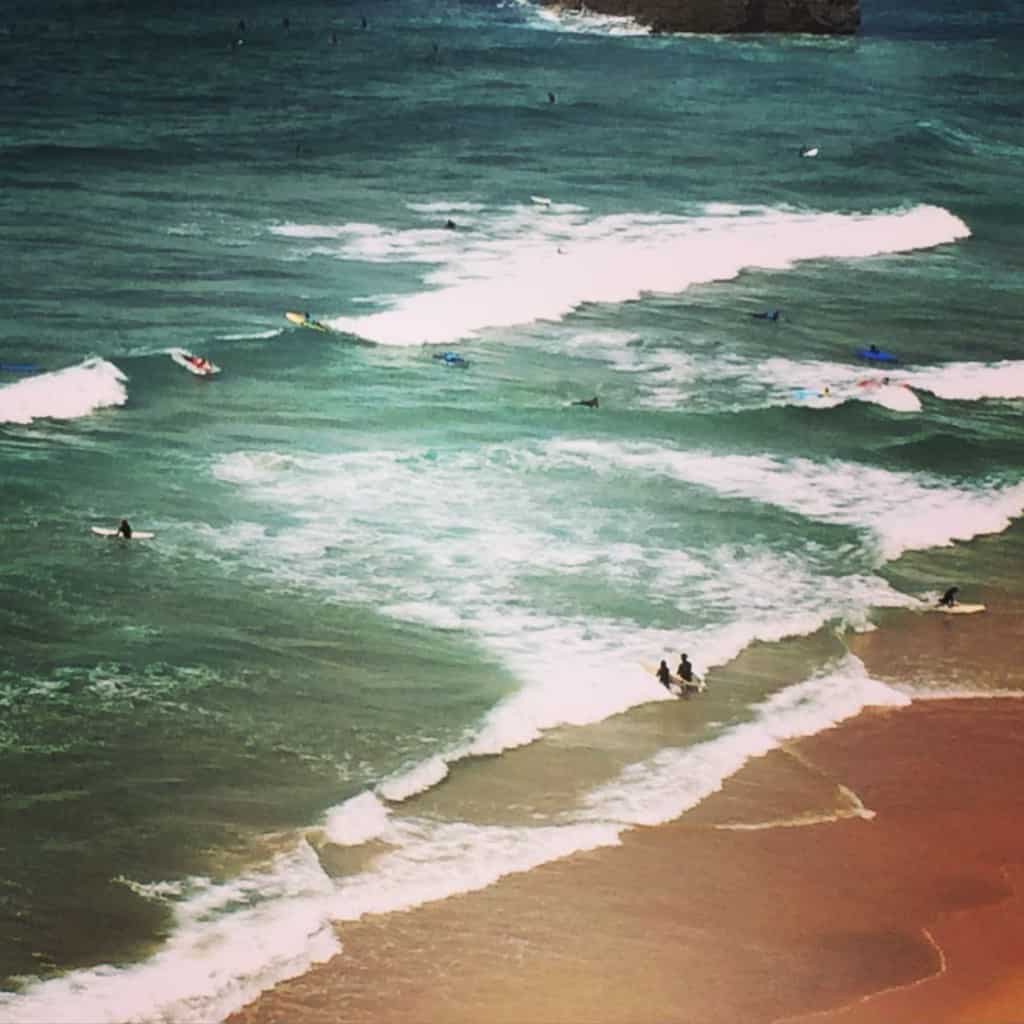 This was great fun and the people hiring out the scooter were really nice too.

I was a bit nervous as I’m useless at riding just a bike, but got the hang out of it and it was quite easy to ride, especially along the river side which is pretty wide. You do get some odd looks though. Most probably, because you look odd! 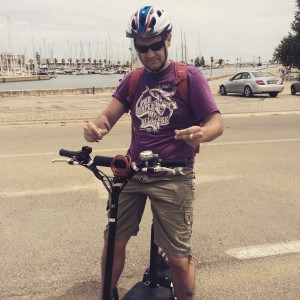 Our grotto trip was an interesting experience. It should have been beautiful with the sun shining through the holes in the cave roofs. But no. It rained and was choppy so we had to turn back as it got a bit scary. Not being a great lover of boats anyhow, I should have hated it but I actually found it quite funny when the little boat started bouncing around like crazy. Bit of an adrenalin rush I guess.

There was some urban crochet going on on the trees in the centre of town which as cute. It was also a weekend of celebration and there were lots of medieval goings on in the town which was quite interesting. There’s only so much lute you can take! 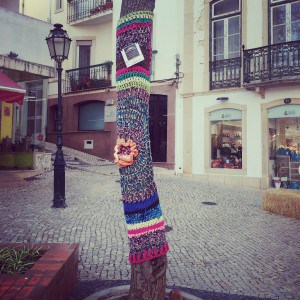 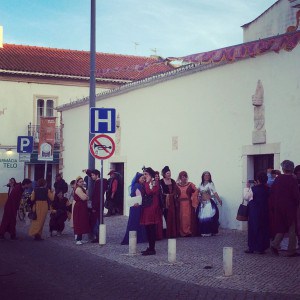 Cork is a big thing in Portugal. Who knew you could make so much out of it – shoes, clothes, accessories. It’s actually really soft to touch and bend. 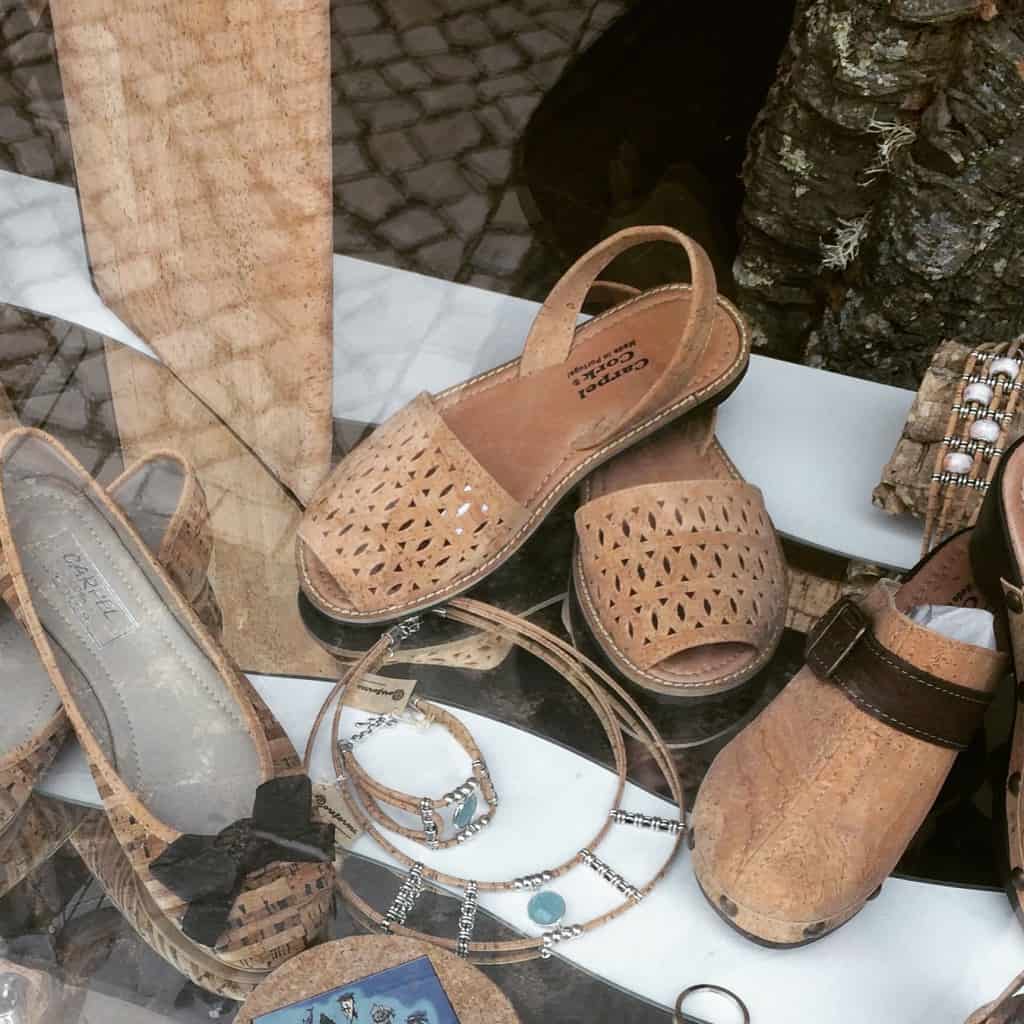 This fella was outside a toy shop in town. And no it’s not human. At night he gets put back in the shop. Properly creepy!! 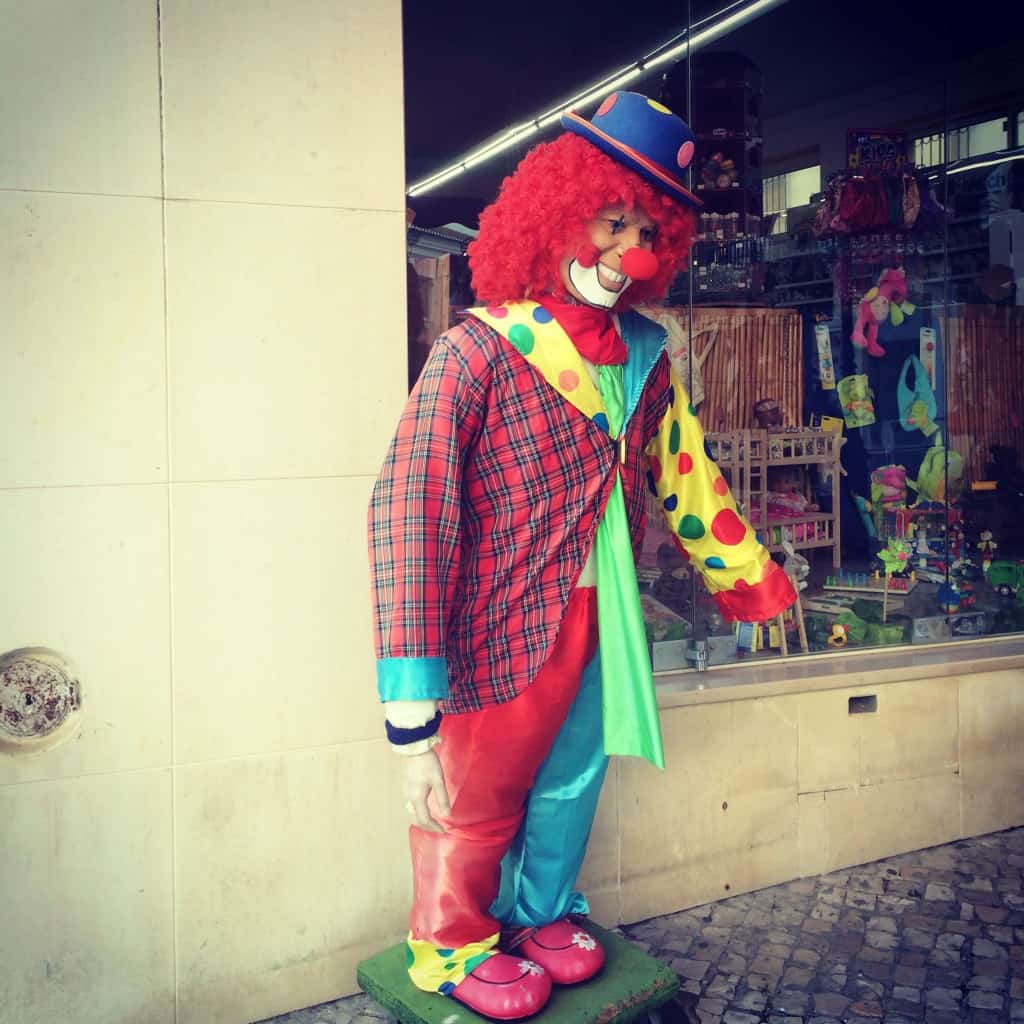 The ATMs aren’t refilled at weekends and if it’s a busy weekend, or particularly over a public holiday (as we were), they can run out of money. You can usually find ATMs further out of town that will still have money – as we did after being given directions by a helpful local.

It’s a chilled out, slow paced, rustic old town. Definitely worth spending time in. There’s enough going on within the town itself so it doesn’t feel like it’s just a tourist town. Though there are times of day/the week when it can feel pretty dead, if you’re not there peak season. 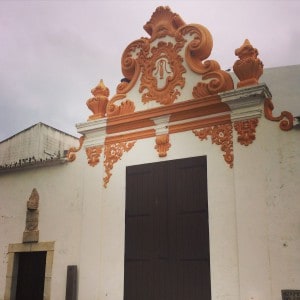 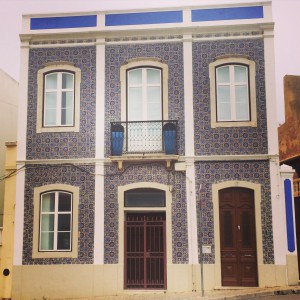 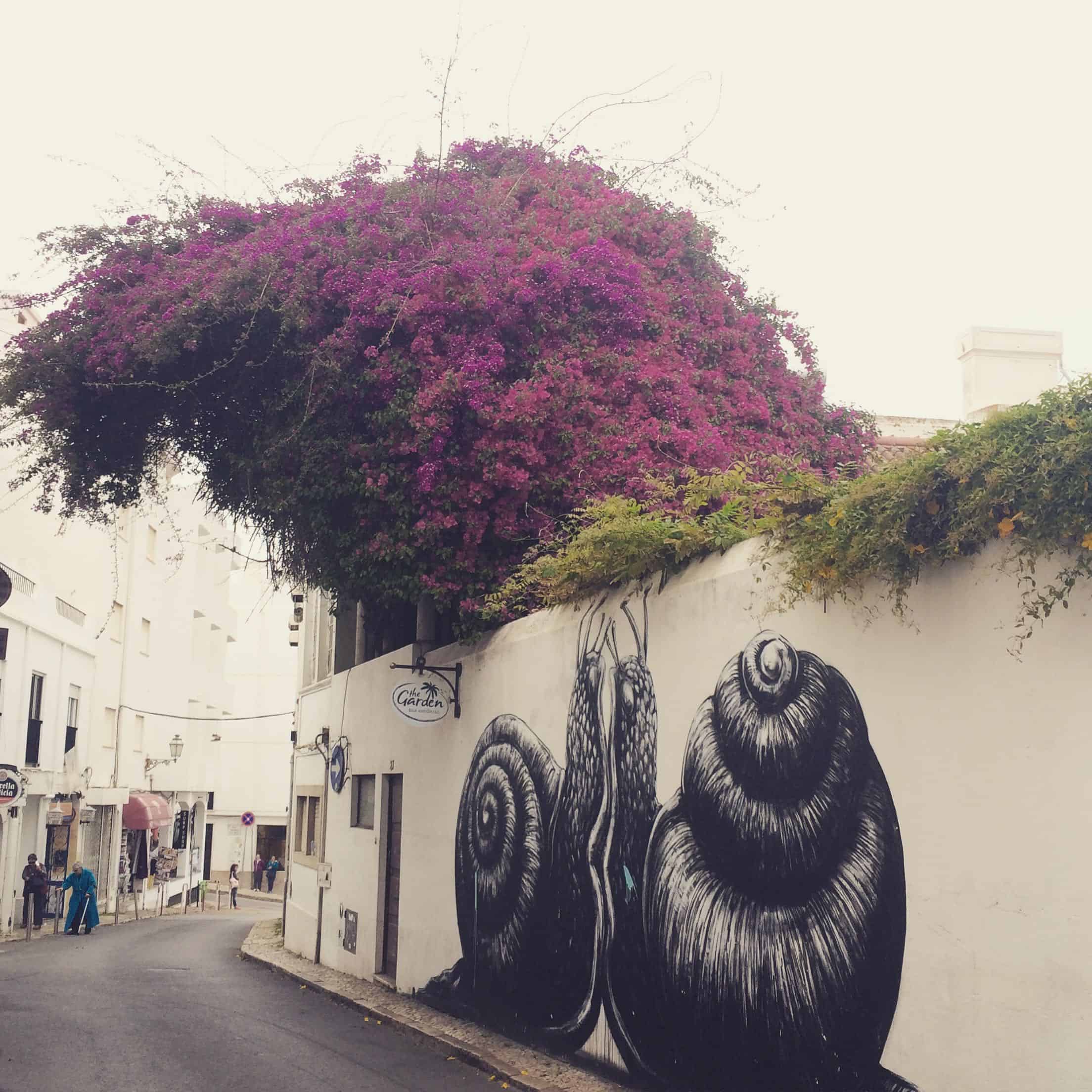 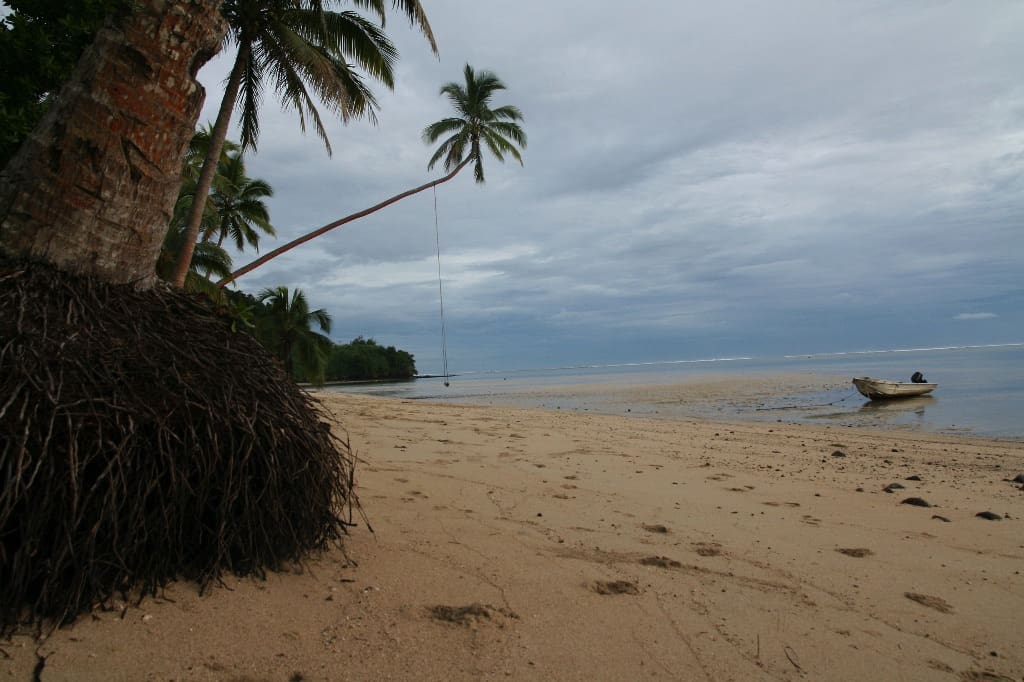 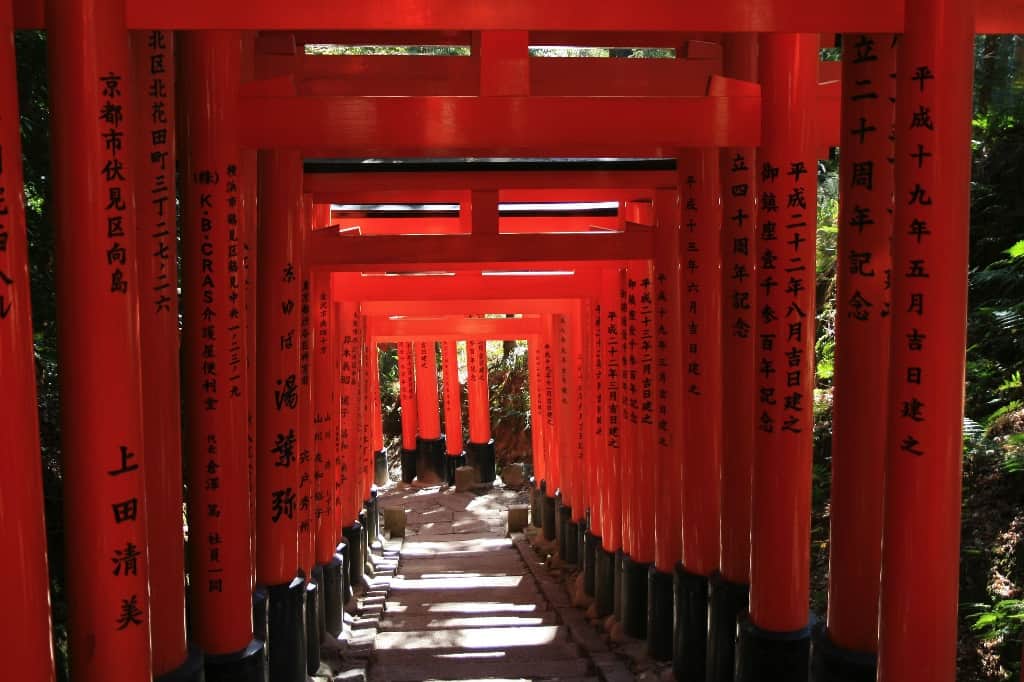 Going loco down in Kyoto 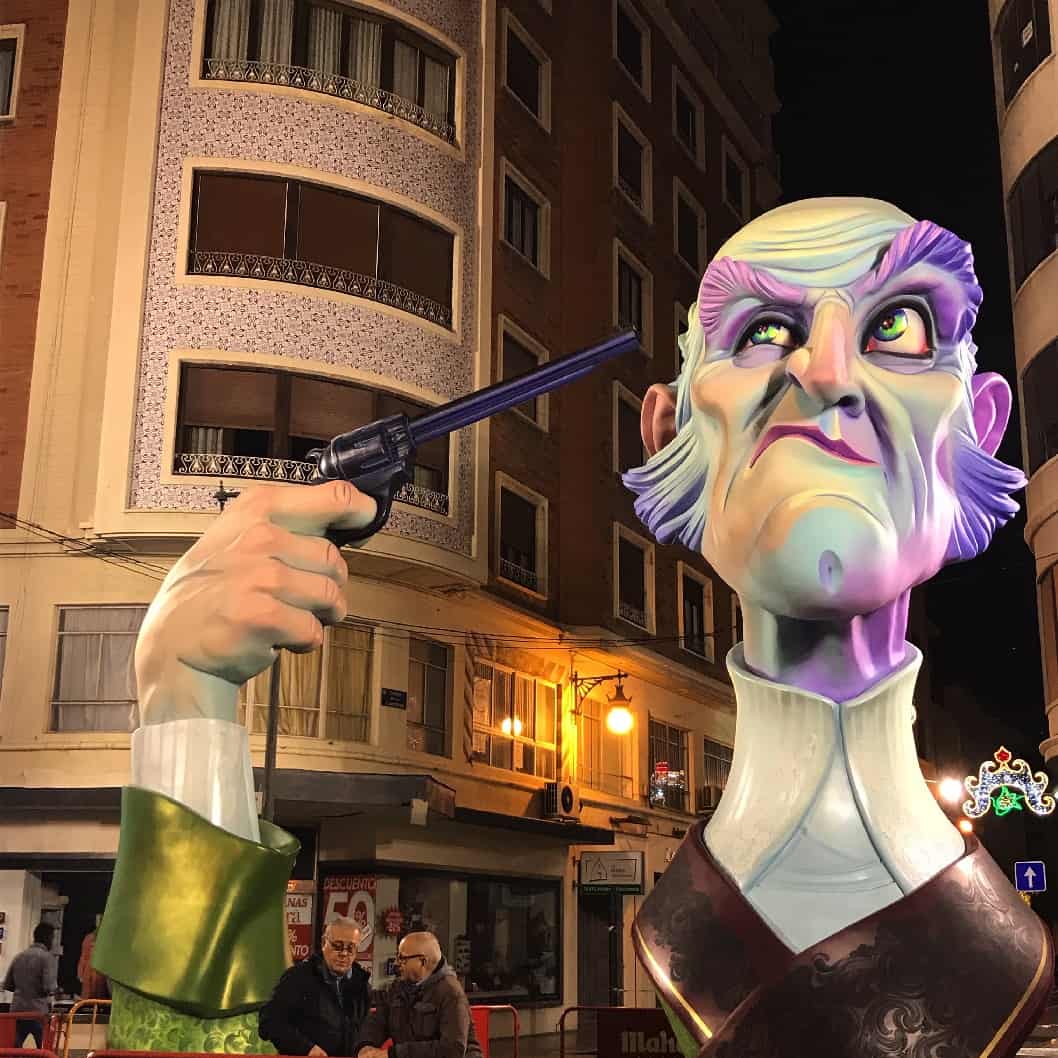