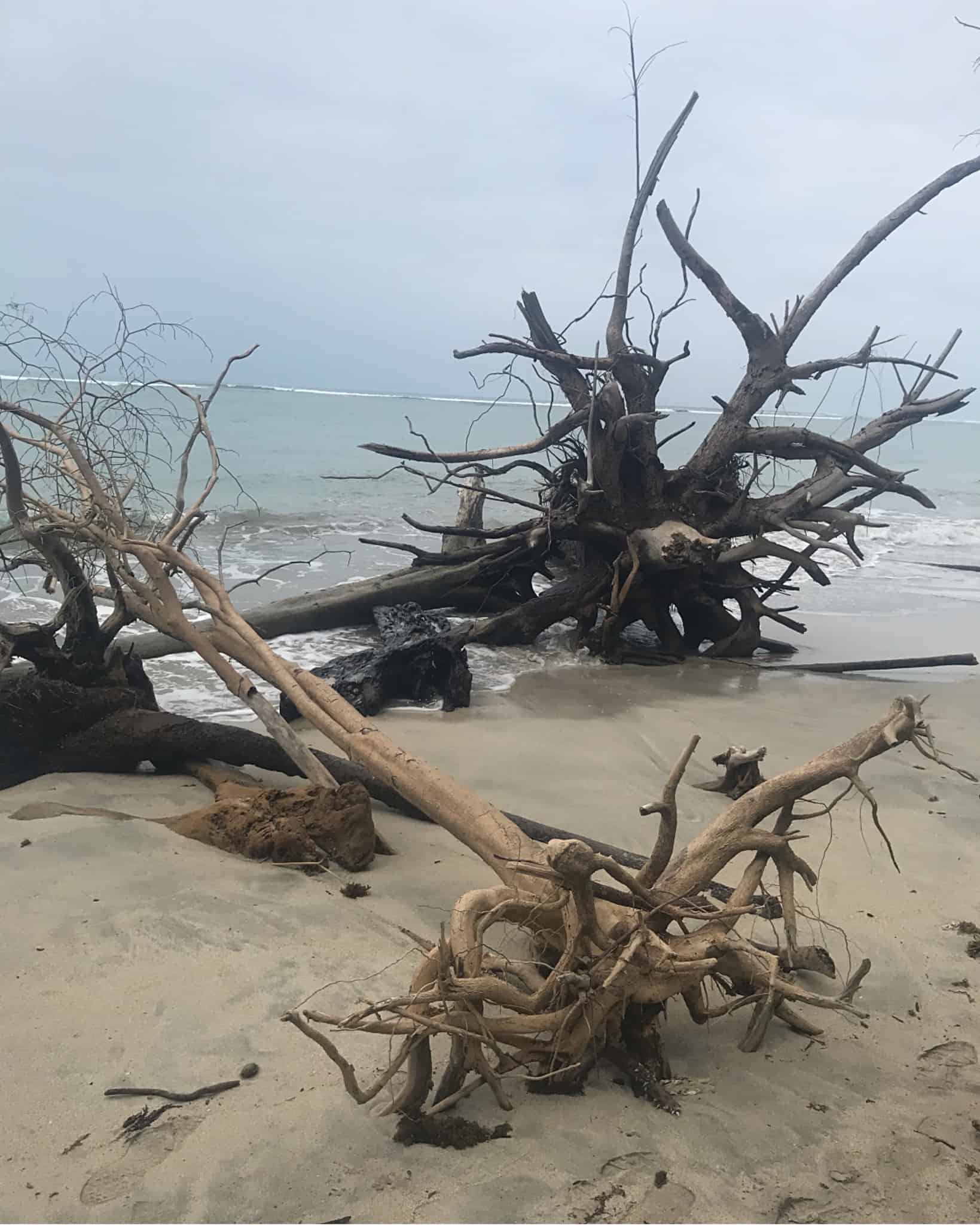 We were nearing the end of our trip and I’d decided to spend a couple of nights in San Jose before flying out. I find it’s always best to give yourself at least 1 night, just in case anything goes wrong and in this case after all that jungle living, the chance to have some sleeps in a standard hotel bed, a wash in a more standard shower, as well as to get organised before flying back to New York.  During our time in Cocles, we realised that pickups off the beaten track didn’t really work with shuttles and trips – they stick to all the main hotels in town, so I thought it would make sense to have one night in a pickup point hotel. As we had a long journey ahead of us, I also spent some time looking at somewhere we could perhaps stop half way to make the journies shorter. In the end, I decided to go half an hour taxi ride north, to Cahuita, which knocked almost an hour off the San Jose shuttle journey time.

We’d heard the national park there was good, so it saved us making a day trip from Cocles. Cahuita seemed to have a mixed bag of reviews. Again it’s one of those places where you can’t get an idea of it when looking at a map. Some people described it as quiet, some as troublesome and rough. I’d certainly expected it to be more built up, due to the number of businesses it shows on the map. It’s a funny little place. Definitely worth a visit but I don’t think you’d want to stay there for more than a couple of nights unless you have your own transport and you’re using it for a base. The great thing about staying is that the national park entrance is on your doorstep.

Our hotel was friendly enough and a decent price for Cahuita (which actually is a little pricier than Puerto Viejo for some reason I can’t fathom – maybe because of the park), but it was a tad odd. Each room had a theme. Ours was the eagle. We had a coffee maker turned into a lamp, which I appreciated the quirkiness of. It needed a little TLC, but hey, we were only staying a night so was fine for us. Some might not appreciate the stuffed eagle staring at you while you sleep though. 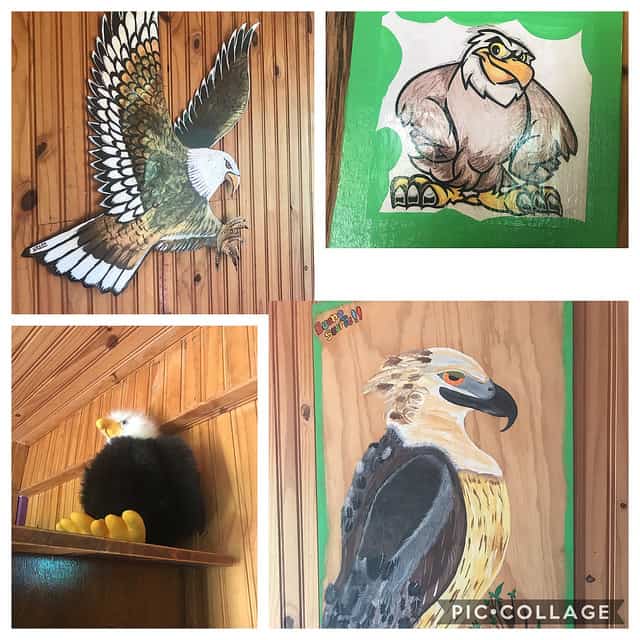 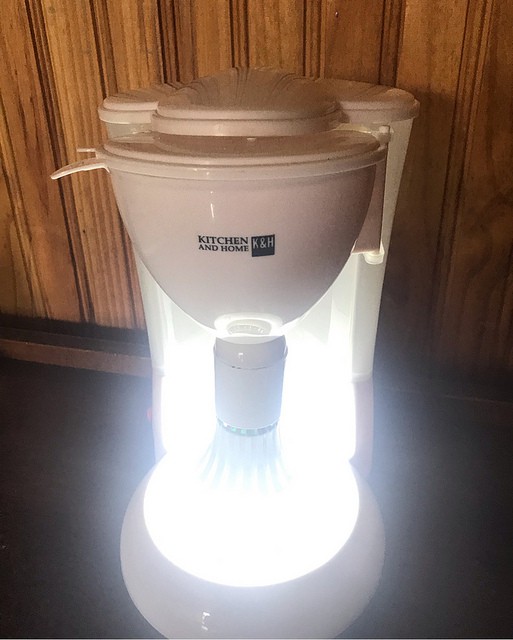 This park does not charge entry, though they welcome donations – and you’d have to be a bit of a scumbag to give them nothing. The nice thing about them not charging is that locals and visiting Costa Ricans use it for get-togethers on the beach. This means in the initial stretch, you’ll see less wildlife as there are more people. But it gets quieter and more interesting the further you go in. The whole park can take quite a few hours and I’m not quite sure what you do if you walk through to the park’s other entrance. I guess you’d have to arrange transport in advance. You can’t really do a loop. The first part of the trail leads you up to a watered area, which is where many get as far as. 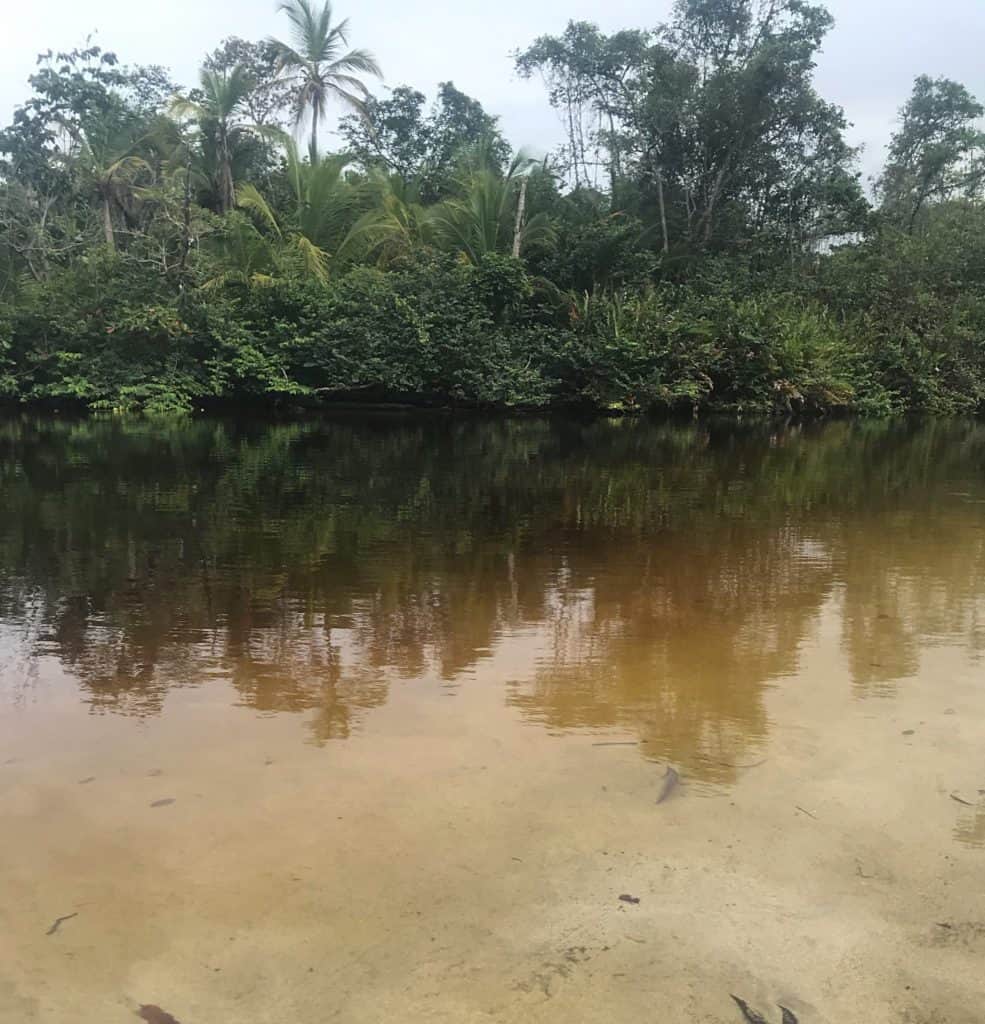 Continuing on further the trail gets a little narrower but definitely more interesting. You come to clearings onto the beach along the way, with huge bits of driftwood. It actually became more stunning as the weather started to turn and threatening storms made it so dramatic.  With waterways to the right of the path as you make your way through, when it’s quiet and there’s no-one else around, the gorgeous blue crabs come out of their holes. They nip back in at the slightest noise, so you have to be patient and put up with other, noisy tourist groups, frightening them away. 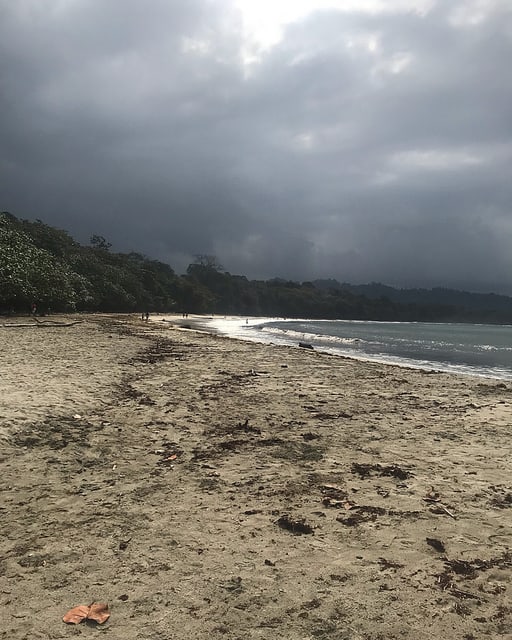 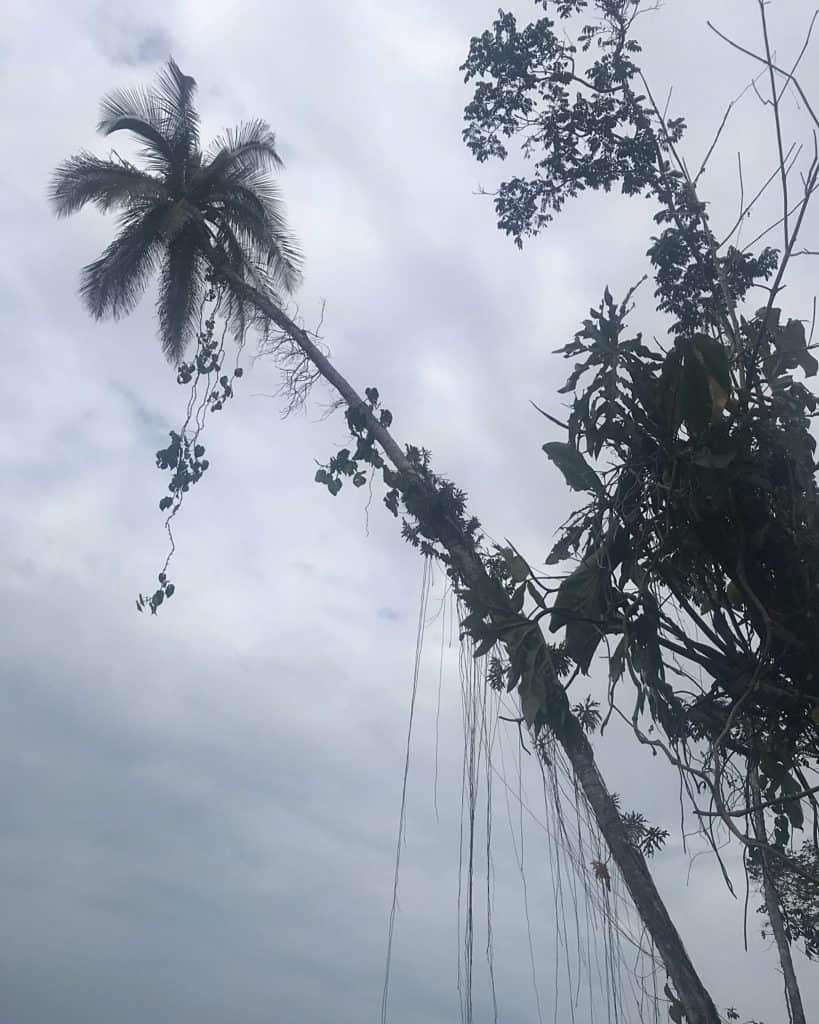 For such a small place it did have some good offerings restaurant and bar wise. One place that completely surprised me was the Facefood Cafe (see what they did there). I couldn’t quite work it out – seemed to do food deli style and as I was feeling quite tired and grumpy I couldn’t be bothered to work out what they had so didn’t order anything other than a drink. Luckily Mark was hungry so ordered a massive beef sandwich which I ended up having half of. It didn’t look like much. BUT… this was literally one of the best sandwiches I have ever eaten. Seriously – it was to die for. I believe the owner is Italian but it definitely had a New York deli-style to it. So good. I really wasn’t expecting such a thing. If you go to Cahuita – go get a sandwich! 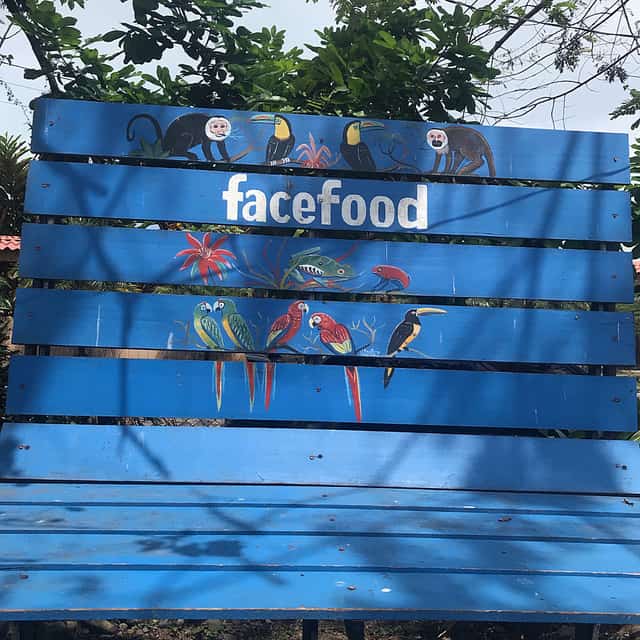 For dinner, we went for aesthetics and chose to eat at Restaurante Roberto La Casa de la Langosta, on the main drag. This has sand as it’s flooring which is always difficult to resist and specialised in seafood – with a tank of lobster etc at the back. Was a nice meal,  nothing wildly special but then we weren’t wildly adventurous with our orders. 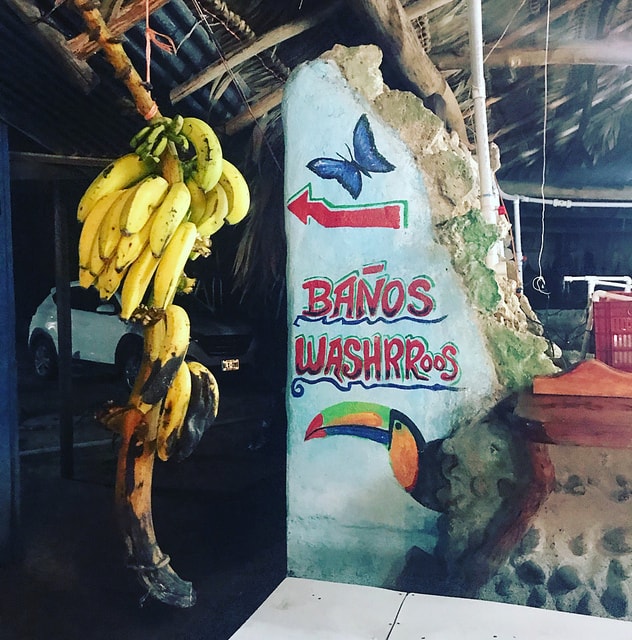 We had a couple of drinks at Coco’s bar – which looked like it was setting-up for a night of live music. We were headed for dinner and an early night, ready to head off to San Jose the next morning, so we didn’t stay around to see how that turned out. Though I’m not entirely sure I’d want to be out that late in Cahuita. There were quite a few characters about and it had a bit of a strange vibe to it, to be honest. I suppose it’s not different to anywhere else along the coast, but it probably seems magnified in such a small place.

I totally messed up booking our San Jose hotel. It was a great hotel to be fair – super modern, efficient – so the opposite of where we had been staying in the jungle that it actually made us feel a tad discombobulated. The mistake I made was thinking I’d booked a hotel with a pool – we’d planned to spend what little time we had there, dipping in the pool and reading. The weather wasn’t that great, so to be fair, it wouldn’t have been quite the idyll we’d planned anyhow. Things also went a bit awry as the craft beer place opposite the hotel, which had been another plus point, had just closed down and the mall next door to the hotel turned out to be a dud. I did drag Mark on a long walk along some busy city roads to a little Japanese cafe I’d discovered about half an hour away. It had been so long since we’d had any Asian food and it wasn’t that great but was a welcome change. I’d wanted to pick up some last minute bits and pieces before we left Costa Rica – I’d left it to the last minute so I would know how much space I had left in the hand luggage. I really shouldn’t have left it so long. I’d seen so many great things but the souvenirs nearby the hotel were not the best. 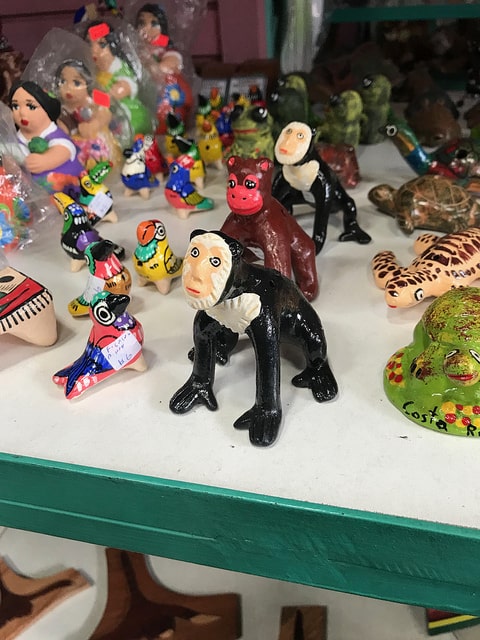 Apart from this cocktail stick porcupine. I REALLY wanted this but had no room!!! 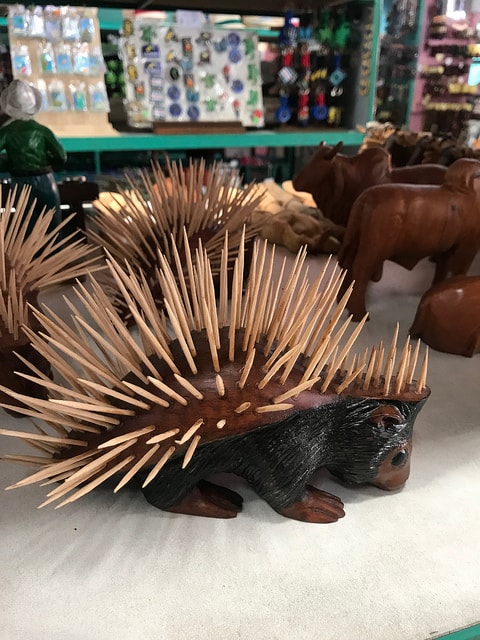 When I changed our flight dates, unbeknownst to me, it had added a change in El Salvador – making it a very long flight back to New York.  It’s incredibly unusual for me to land in a country and not take the opportunity to explore, even if briefly, so it made me quite twitchy to only see the inside of the airport in El Salvador. We had a very interesting security system going on. We had to go through to the gate (a small room), not taking any liquids through with us, despite it being many hours before the flight. As we walked into the gate/room, the security check was manual. They literally rummaged through everyone’s bags. This not only took an incredibly long time, but it also meant all that organised packing was totally messed with. Turns out in the end, they forgot to even look at my handbag which I’d forgotten I had a large bottle of water in. Made a bit of a mockery of the security check but was a right result for us.

I’d always wanted to go to Costa Rica but as it got closer I started to have doubts about how it was going to be/how much I’d like it. I think from my rather limited previous experience, I’d (sweeping statement alert) found Central America to have a slight tough, loud, macho vibe, I really wasn’t expecting much from the food, I thought you’d have to go on deep jungle treks to see anything and quite frankly I was just really out of practice with proper travel, so didn’t have a lot of confidence. Turns out, Costa Rica, like any country is not without issues. I wish it was safer (but it’s not majorly unsafe), I wish it was cheaper (but it’s not majorly expensive), but all in all, I found a fantastic country which I have a huge amount of respect for. The whole no army thing seems a bit of a trite t-shirt slogan (hmm – might have bought a t-shirt that mentions no army), but it does seem to be a country which tries at least, to get its priorities straight. It values its natural resources and wildlife. It values a decent quality of life. It’s not perfect but where the heck is? and I like the fact it at least tries to do the right thing. People are pretty laid back and friendly without any pushiness. The food turned out pretty good after all – more for me on the Pacific side. To give it a hokey tagline it could be described as the ‘Bali of the Americas’. It’s tropical, has a spiritual vibe, healthy food and surfers.

I can’t quite decide how I felt about the difference between the two sides. The Caribbean side is more rustic and chilled but felt a little more hostile at times. Strangely, though the Caribbean side is less developed, it seemed to cost more most of the time. There’s no way in six weeks of flitting about I can make much of an assessment of anything, but it’s somewhere I think I’d like to spend more time in, in the future. Maybe not even to go exploring. Maybe just somewhere to go hang out and just live and enjoy for a while. Perhaps that’s what makes me think of Bali. You can enjoy the vibe without necessarily trekking around. (Please note I have never been to Kuta or any big, crazy resort there).

Show me the money

The money in Costa Rica is gorgeous. The sloth on the 10 colon note is particularly special (hmm might have bought the beach towel).

Whenever you are in a jungle area, there is always at least one leaf on a plant moving inexplicably, while all other leaves are not. With no wind. Always. Law of the jungle

They were all right!

The one piece of advice that everyone gives that I now heartily agree with – bring a headtorch!! 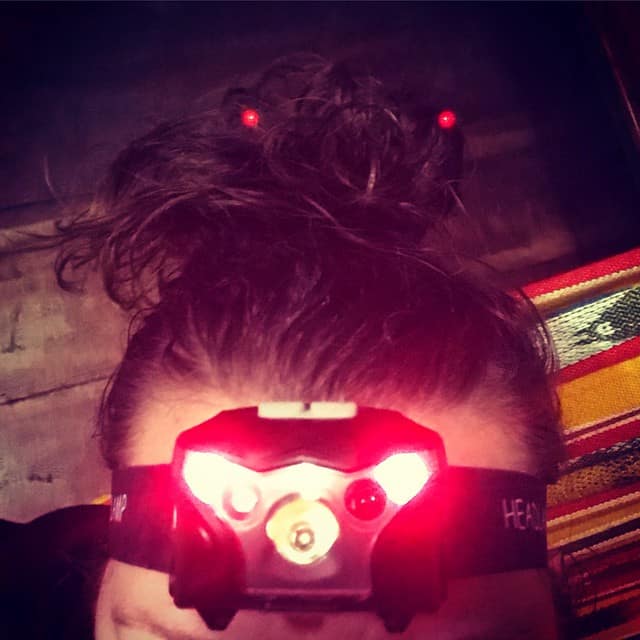 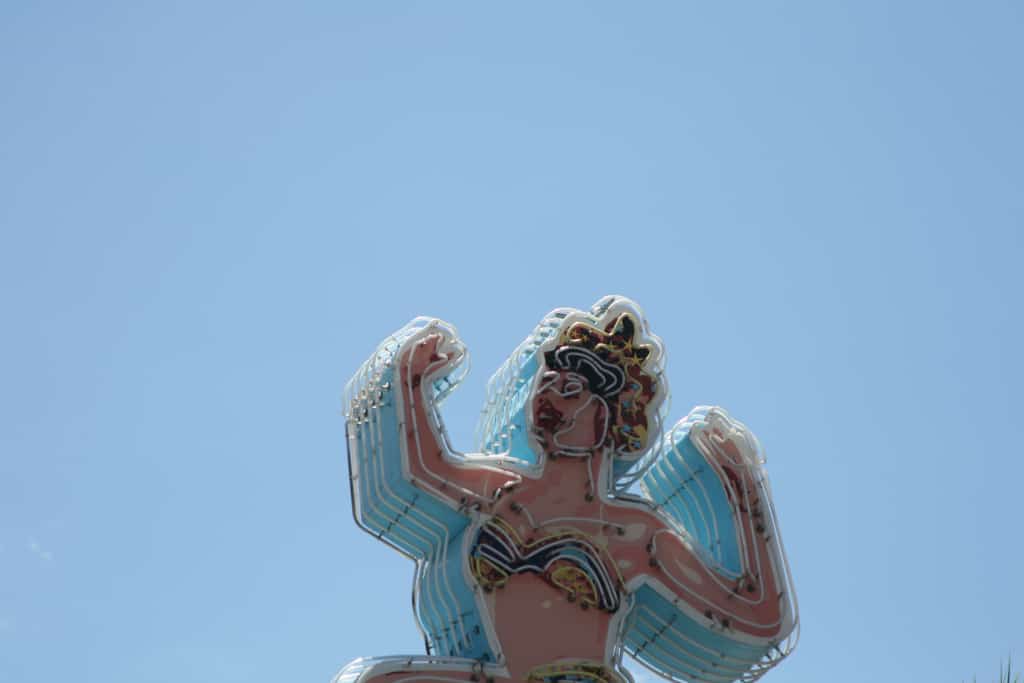 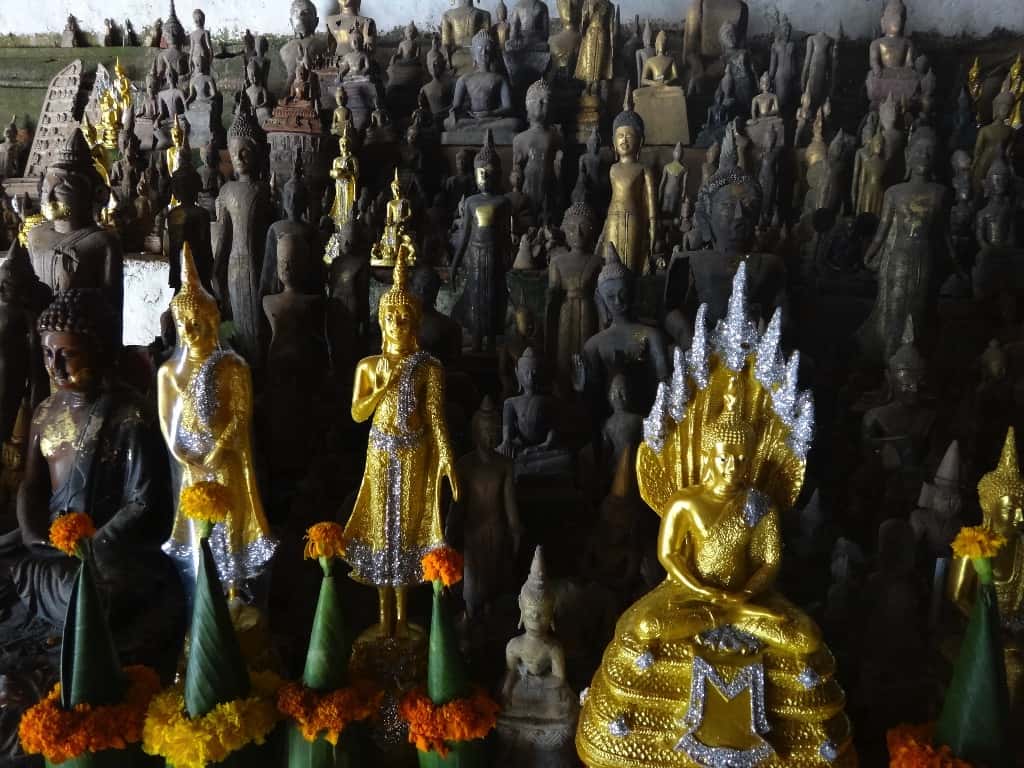 We didn’t have a Laosy time in Vientaine & Luang Prabang 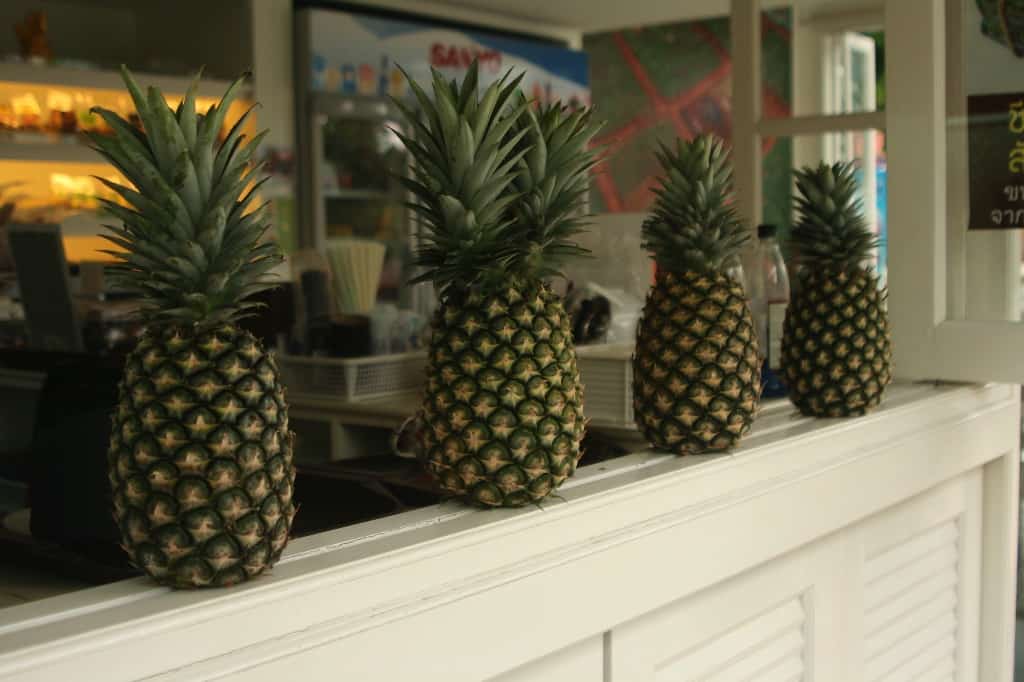