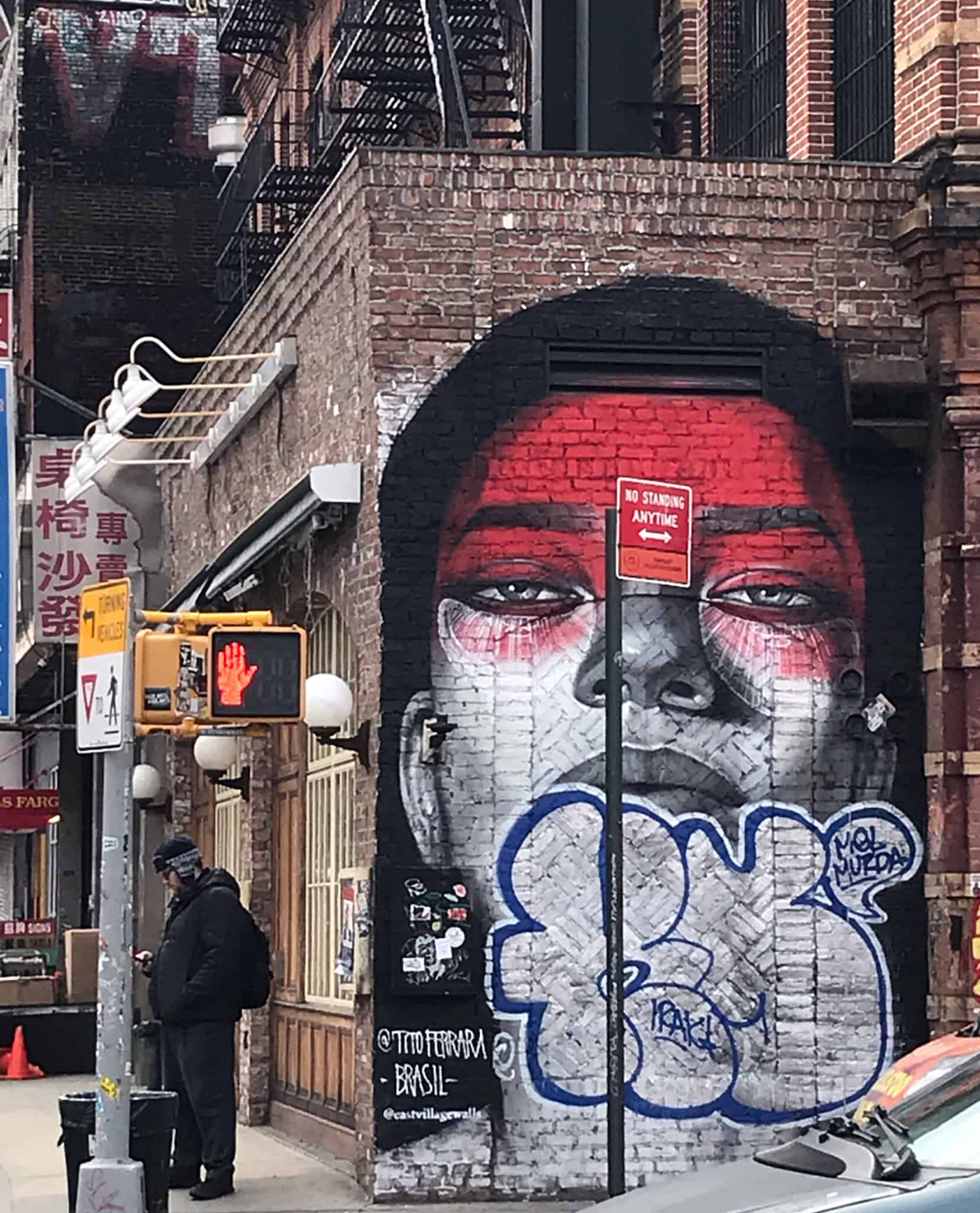 We were extraordinarily lucky when we’d been in NYC in January, as we’d been treated to some positively balmy temperatures – of around 6-9 degrees Celsius (42 – 48 for the Fahrenheiters out there). The main reason this was fortunate for us was that we had mostly packed with the 7 weeks of weather in the warmer countries we were visiting and with hand luggage only we had packed light. Some thermals and light scarves just about kept us alive but this time around, at the end of February, the temperatures back to normal – i.e literally freezing, we did suffer somewhat. It was so cold that without gloves and hats, parts of us were burning with the cold at certain points. Mark, in particular, feels the cold in a big way. But I decided the best way to warm us up was, of course, the best way to see anything in NYC – by walking!!! We were back in our newly found favourite Hotel Mimosa down on the edge of China Town/Lower East Side. From there I created another of my own little walking tours.

First up the Bowery mural wall. It’s kind of a famous, ever-changing street art wall, though I was a little disappointed, to be honest. It does, of course, make a fantastic photo backdrop though so keeps the tourist happy and we saw a few amateur photo shoot going on there. The couple, both dressed head to toe in leopardskin, must have had some great shots. Gutted I didn’t get a shot of them myself. 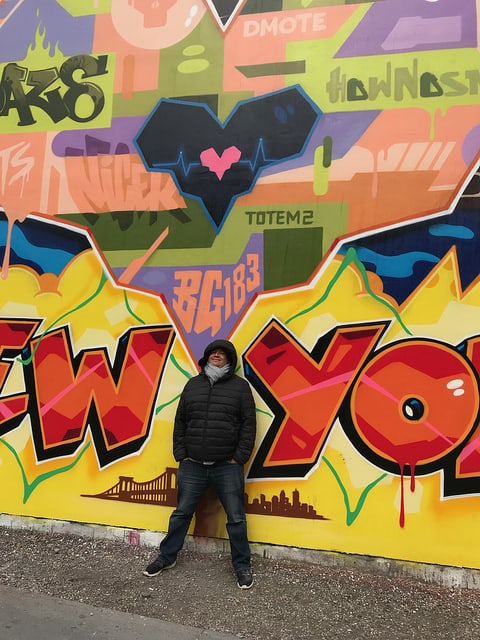 Walking west all the way through Greenwich Village, through a surprisingly deserted Manhattan, we reached the Hess triangle. This little power to the people monument is a tiny plot of land which remained private on principle. I adore the site Atlas Obscura, where I found this and other interesting (and of course obscure) places to visit. See their article here for a more in-depth history of David Hess who resisted the city’s domain laws for as long as he could. 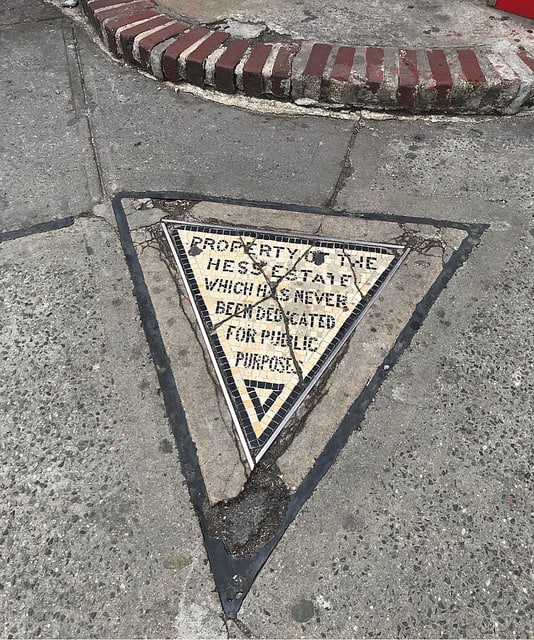 I first visited NYC a couple of years after 9 11, so I have never experienced the city with the towers as part of the sky-line or the World Trade Center as a tourist attraction. When I first visited they were still dealing with the decimation on a physical as well as emotional level. I had viewed the hole from the top of the Hilton hotel and just the sheer size and depth had been mind-blowing. In more recent visits I’d gone back as it was still pretty much a construction site, though always somewhere to pay your respects. Although I’ve been back since the Freedom Tower was completed, I had not been down there and so this trip, particularly as where we were staying was fairly close, we headed over. The first thing that I felt was a real sense of the scale of the new build and therefore the immense size of what had gone. The memorial is beautiful and moving. The Westfield World Trade Center building is also beautiful but it felt a bit ‘sponsored by Westfield’. I mean it is just essentially being a posh mall – but it felt a little off. A little uncomfortable somehow. It would have been a space for a gallery, somewhere for contemplation, but it feels sterile as a shopping complex. 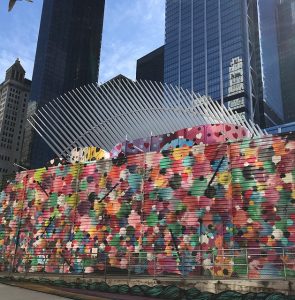 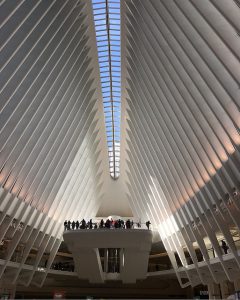 We knew that we would be going back to our little Spanish town, which great as it is, isn’t big on variety. Spain as a whole isn’t, if you’re outside the city or expensive areas. So – we were going to make the most of this last chance to fill our faces with feisty food and canny craft beer. We went back for Dim Sum at the amazing Hong Kong style 88 Palace (as discovered on our last trip). We had to have Thai and Vietnamese, the former of which you can occasionally find in Valencia province, but the latter is difficult to find in much of Europe, outside the Czech Republic. We had some seriously good craft beer. I have to say it… I don’t want to feed that superiority complex too much, but… American ales are definitely the best in the world! Big shout out to EVS (East Village Social), Ace Bar, Doc Hollidays, McSorleys and to the many name-unknown establishments that served us well! 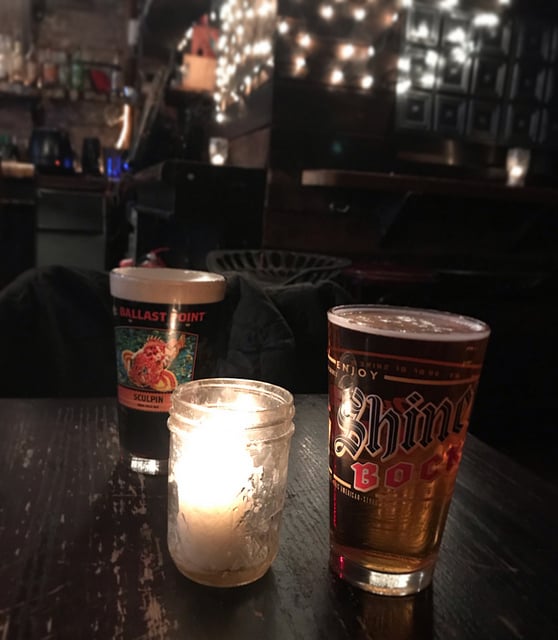 A new Vietnamese favourite. Pho Vietnam on Chrystie St has yummy food and has welcoming and interesting decor, which includes, for some reason a locomotive on the ceiling. It was quite interesting while we were there as the Vietnamese TV station they had on was showing Trumps visit in Hanoi, to hook up with his equal in the demented stakes – Kim Jong-un. 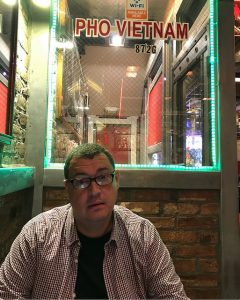 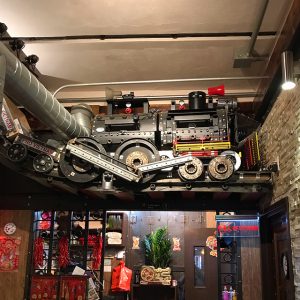 A Tim Burton inspired bar and restaurant where every day is Halloween. This is a laugh and a must for any Tim Burton fan – though I am not particularly, I can appreciate the aesthetics. We mainly ended up going as we’d been drinking with some Irish guys who’d been and said it was a trip and we’d had a few so thought was a great idea even though at this point food should have come before further beverages. I’d recommend booking if you want a guaranteed seat. It’s a pretty small place and we were lucky that we nabbed a seat in the front, which they had to kick us out of as they were setting up a DJ or something. As we headed in to find another seat we were told we couldn’t sit anywhere but the crowded bar (which had no seats anywhere) unless we were eating. It’s only when we objected, as we’d been kicked out of our previous seats, that they conceded and let us sit back there. The menus are themed and there are actors roaming around who stay true to their characters which can’t be an easy task with so many inebriated guests. It’s not done incredibly well, detail-wise, but it’s a bit of fun. Mark got married to the ghost lady while I was in the bathroom which was unexpected. Worth a one time visit. Though bring a full wallet! 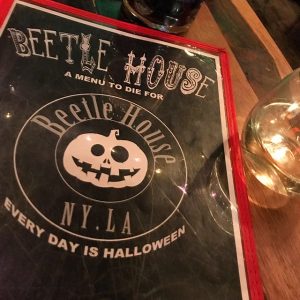 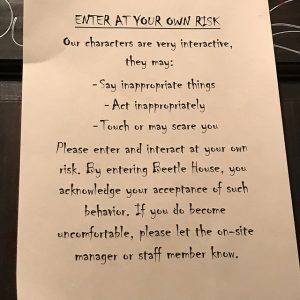 We tried once more to get into Scarr’s Pizza but was rammed again. This was our last day, we were due to fly out that evening and by this point, we were dead set on getting pizza. Trouble is, this was one of the few neighbourhoods where decent pizza was few and far between and we didn’t have to time to search too far. In the end, I reasoned that if we headed in the direction of Little Italy, which wasn’t that far, that things would pop up. I had not wanted to get anything in Little Italy itself assuming that this would be over-priced, touristy and ultimately disappointing nosh. I figured on the outer edges there would be more legitimate offerings. This was, however, when we realised how small Little Italy has become. It really is just a gathering of a few streets and the streets around were housing China Towns offerings on one side or base junk food on the other. So we just decided to pick one and hope for the best. This Russian run restaurant looked the part, but was, as I had predicted (all together now) over-priced, touristy and ultimately disappointing. Reviews of Italian restaurants in the USA always make me raise an eyebrow. They love to use the word authentic, but although I don’t travel to Italy often, I have never seen half the dishes you get in US restaurants. I guess it’s authentic if you’re classing it as Italian-American. I should have trusted my instincts and not walked through that authentically decorated door.

As ever we kept ending up back in the East Village to eat drink, shop, ponder. I picked up some shades in my beloved Fabulous Fanny’s – home of vintage spectacles and sunglasses. We sheltered from the cold in The Bean. A cutesy, hip cafe with wonderful hot drinks, groovy snacks and great people watching. We visited the dog park in Tompkins Square Park, though didn’t linger as long as normal because of the cold. Ditto with the obligatory squirrel watching. It may be gentrification central, but it still holds onto its soul. And is sometimes simply just bat-shit crazy!! 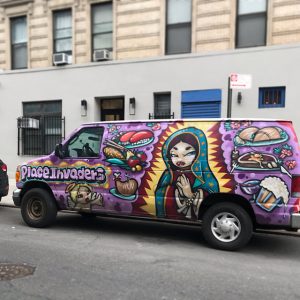 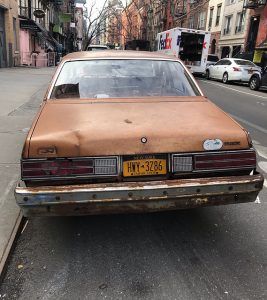 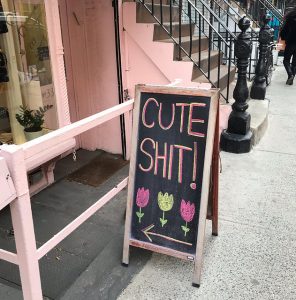 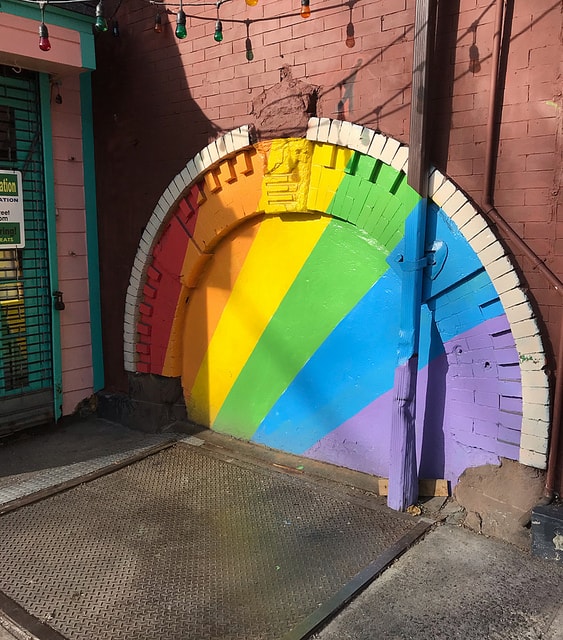 I love those old family stores that have been there forever. You know their time is probably numbered in NYC, so it makes them even more of a treasure. I would love to know who still goes and buys their hosiery in Ideal Hosiers. I bet it’s got some loyal customers still though. 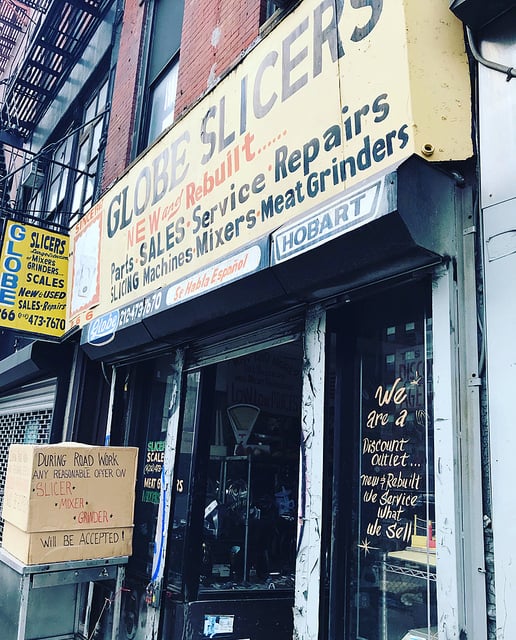 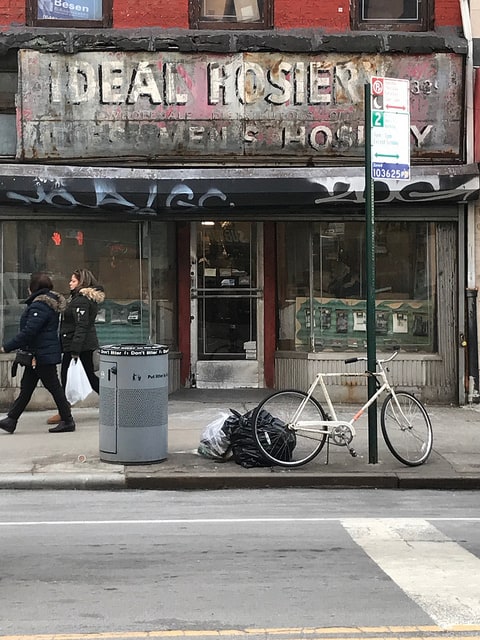 Mark just couldn’t get why going to Target is on my list. Admittedly the Lower East Side store is not the best one, but even he had to admit that there are always treasures to be found! 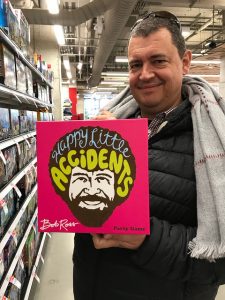 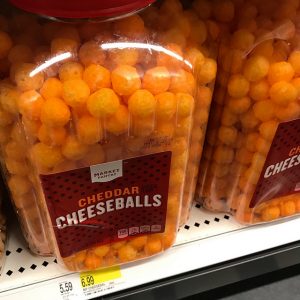 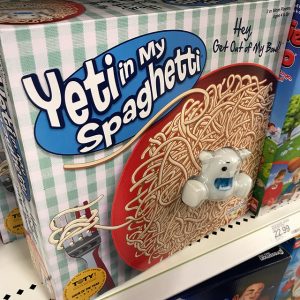 I’d read about the Lenin statue, which used to be somewhere else but has more recently been moved to the lower part of the East Village. Having visited some current and former communist countries, it’s not my first Lenin statue, of course, but this just seemed an amusing thing to be found in the USA and as it wasn’t far from our usual stomping ground, we went to check it out. I don’t know why this amuses me. Obviously, Lenin arguably ended up being a complete shit, but the bizarre anti-communist hysteria which you still find quite strongly in the US has always been an oddity to me. 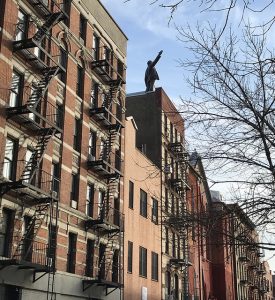 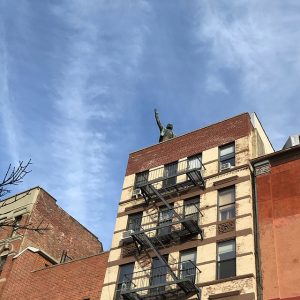 Always an NYC highlight I find is overheard snippets and there was a couple from this trip that stuck with me.

The arty but rich looking middle-aged man on the phone in the East Village: “I wish he and his wife would get cancer and they would have to lie in a bed next to each other and smell each other’s bed pans”. Harsh!!

Person one: “I love Irish theatre”
Person two: “I think you mean playwrights” 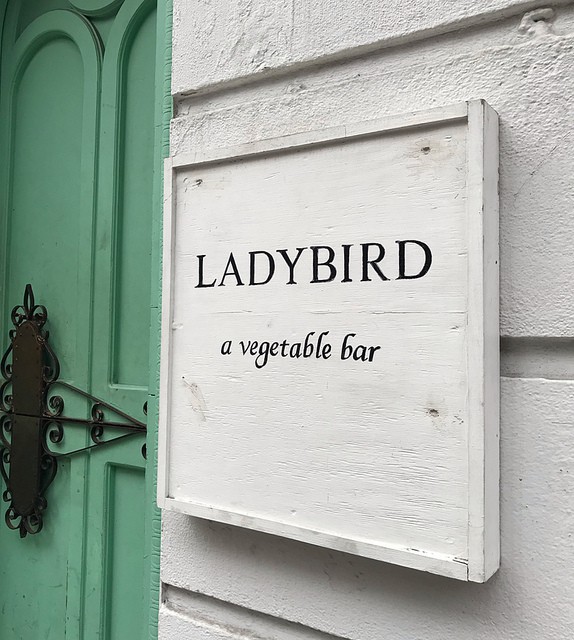 Our two trips in NYC have not dampened my enthusiasm for the city, but I learned (or rather re-learned) a few things. 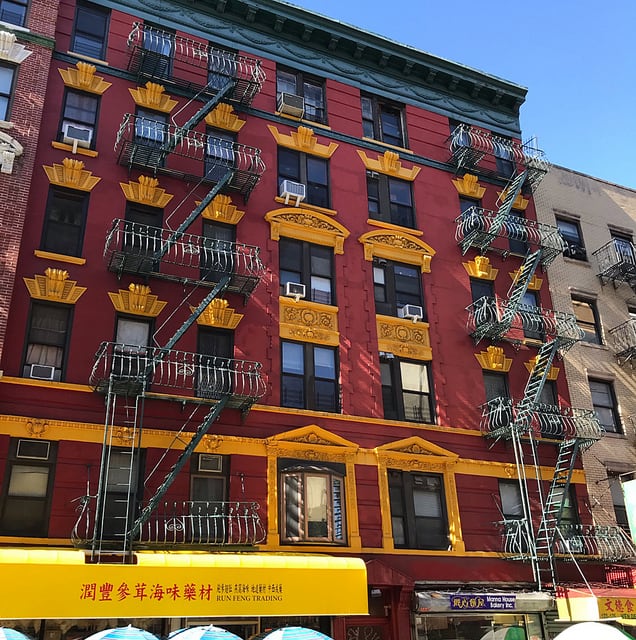 Seemly to reinforce my adoration for this city, I bought yet another ‘I love NYC’ t-shirt from the airport on the way out, which I will, of course, wear in a post-modern ironic way, which is itself a double bluff as I really do love NYC. 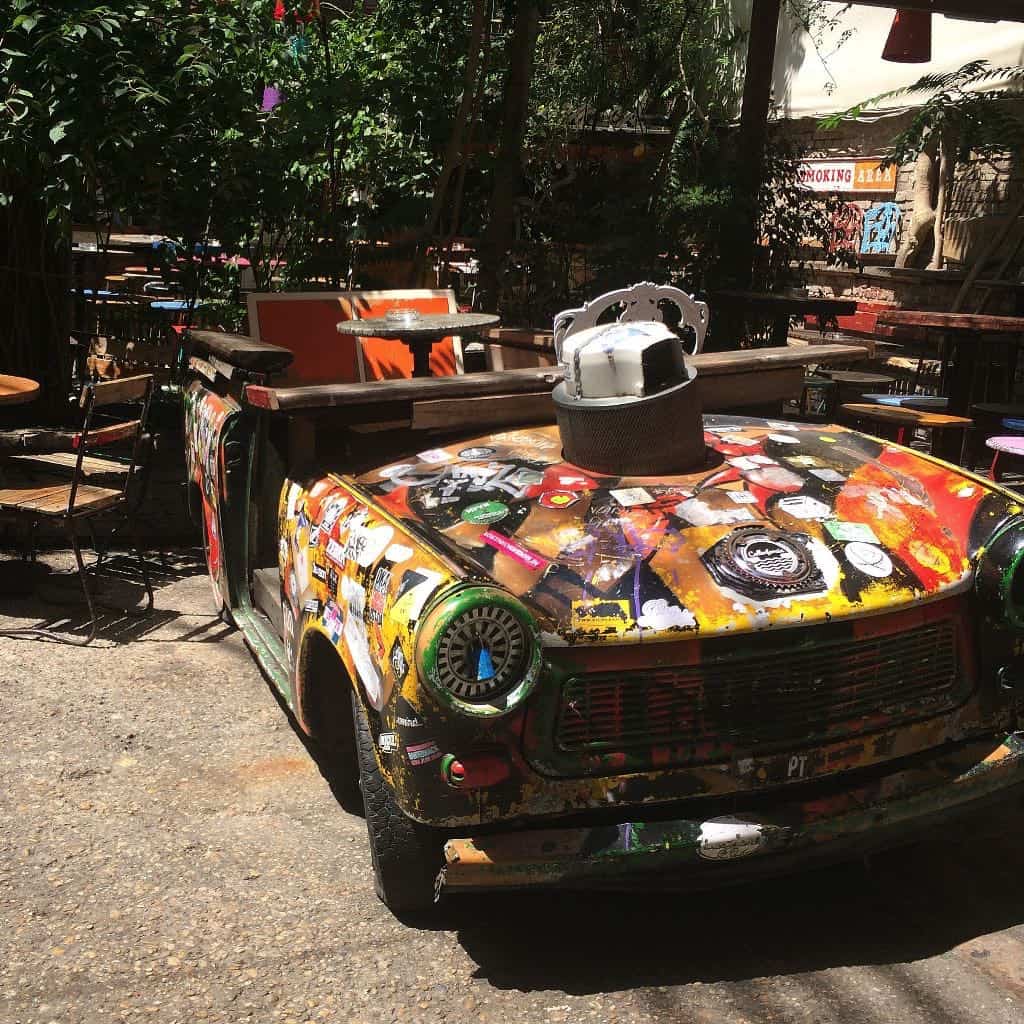 Only the best in Budapest 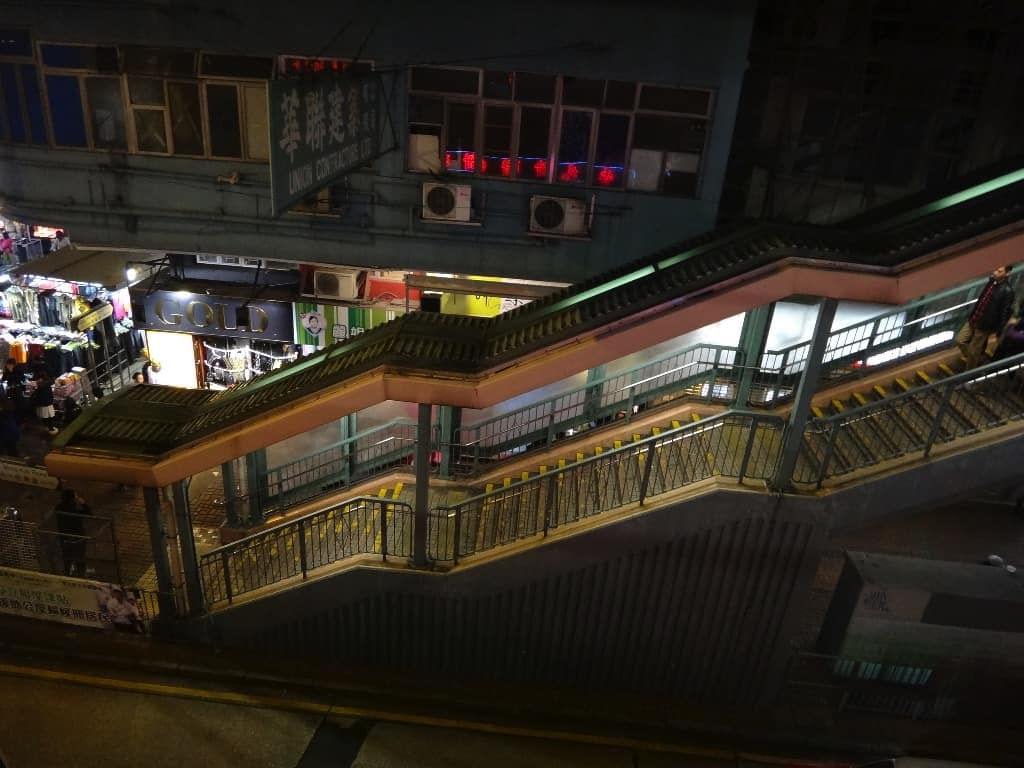 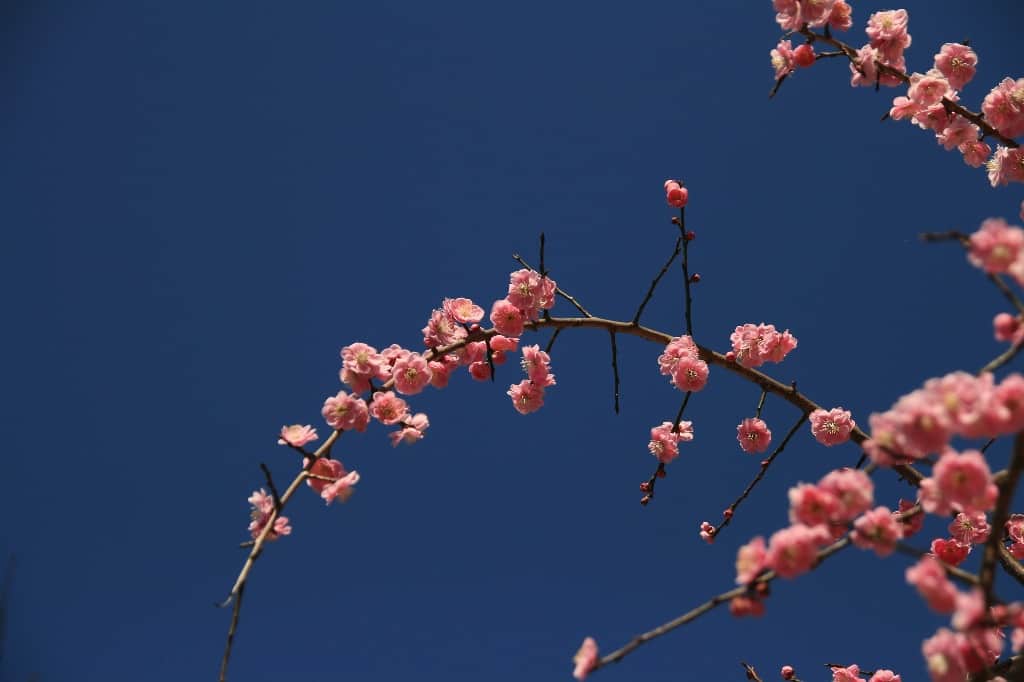 Back to the capital, but Tokyo-only for a few days